Android development may have started as a grab bag of poorly integrated libraries with no documentation and running it all in a bad IDE, but things have really turned around over the years. Android Studio makes it easier to build working apps with fewer mistakes; Kotlin makes for more readable straightforward code; and the combination of Jetpack and Jetpack Compose provides a clear direction for faster development. Today's announcement really focuses on Jetpack Compose, but as you would expect from each Google I/O, new versions of each are coming out and they've got something new for everybody.

Jetpack Compose has been in open development for about two years and is nearly ready for release now. A beta was released back in March, and now Google is aiming for a final release of 1.0 in July. There are also plans to bring more Material components and support for larger screens to the framework in the future. 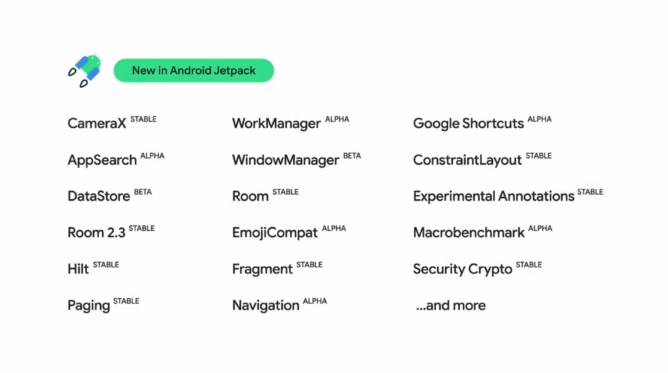 The new tools don't just center on UI libraries, Google is also introducing some powerful performance tools to make apps faster and more efficient. This starts with an alpha release of Macrobenchmark, a tool for recording and identifying cumbersome processing steps that slow down startup times and introduce jank.

Google is still releasing more information, but highlighted additions like the new Accessibility Scanner and Memory Profiler in Android Studio, and a replacement for SharedPreferences called Jetpack DataStore built on top of Kotlin Coroutines for managing data persistence in your apps.

While the breakout blog posts for each product aren't live at the time of publishing, you can start downloading the newly released Android Studio Arctic Fox Beta 1 to begin checking out all of the new libraries, features, and tools.

How do you feel about Google's big Wear OS (and Tizen and Fitbit) news today?