At Google I/O 2021, the company announced improvements to its Google Workspace product with ambitions to tighten up its competitiveness against other collaborative productivity solutions.

The company is essentially attempting to convert its disparate Drive mediums — Docs, Sheets, Slides, etc. — into what it calls smart canvas with enriched collaboration features. 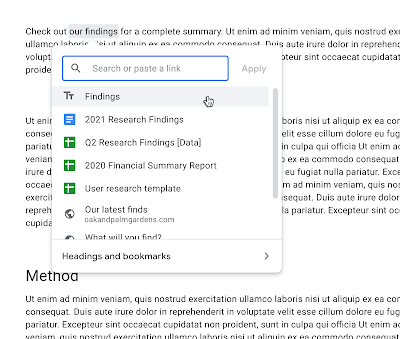 A few of them revolve around @mentions like the so-called smart chips that use an @mention to attach other Google Drive documents in the domain associated with that person. Embedding the chip allows teammates to open up a mini-tab to cross-reference the document. @mentions also enabled connected checklists which lets people assign members to certain missions in Google Tasks.

Google's videoconferencing app Meet also gets a few new tricks as well. Users can present their work on a call directly from their Doc, Sheet, or Slide project — call participation isn't live yet, though, and won't be until the fall. Live caption translation is set to come later this year with conversion from Spanish, Portuguese, French, and German over to English available.

The company is also expanding the canvas beyond the traditional page view with new pageless formatting in Docs and and a timeline view for date-oriented Sheets.

And it wouldn't be the 21st century if there weren't some AI elements to boot like assisted writing that, among other things, provides gender-neutral word replacements and assistive formula suggestions in Sheets. On Meet, the app is mixing in noise cancellation plus camera brightness and centering correction.

Some loose ends include templates for tables and meetings notes in Docs, the ability to create and edit a Doc, Sheet, or Slide project from Google Chat, and emoji reactions. Expect plenty of these features to be passed on not just to Google Workspace customers, but to the general public as well.

Google is helping you stay safe with new map routing options and telling you when public spaces ...