I love kickstands. Everything should have kickstands, and the fact that everything doesn't is a damn tragedy. That's especially true for tablets, little slabs of fragile glass that are designed for media consumption. Despite some sterling work from Microsoft, Lenovo, and (occasionally) Samsung, tablets with kickstands as an integral part of their design are still rare. But with this cheap add-on from Moft, you can give almost any tablet the kickstand it deserves.

The Moft X Tablet Stand is essentially cardboard, fabric, a bit of glue, and a few magnets. But all that unassuming stuff is assembled in such a way that it's an origami kickstand for your tablet. And unlike the other various small stands on the market, it's happy to travel with your tablet wherever it goes, stuck onto the back and folded down to about three millimeters flat. 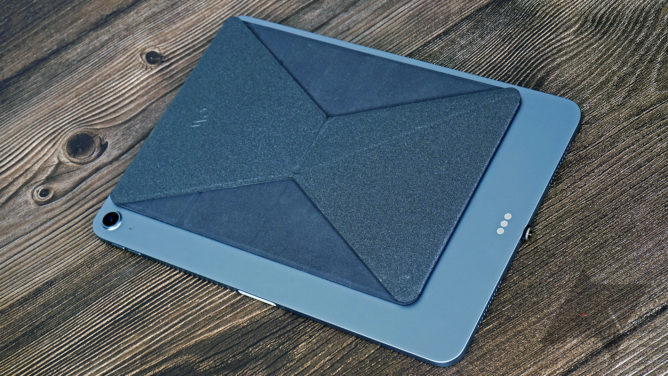 With two unfolded positions, plus an extra fold in the triangular portion, the X Tablet stand has a total of four different angles at which it can rest. You can add an extra two for viewing your tablet in portrait mode, for a total of six positions. Technically there are four more options (reversed horizontal and vertical, but the extra cutout doesn't change those angles), though honestly you're unlikely to use those.

And that's it! It's a little add-on that unfolds when you need a stand, and disappears when you don't. While it's practically weightless and won't get in the way of any normal tablet grip, it's juuuust thick enough that it won't work with a protective case. But no worries: you can stick it to the outside of the case instead. In addition to being perfect for movies and music, I've found myself holding onto the unfolded stand when I'm carrying it around, for comfortably playing games like Hearthstone. 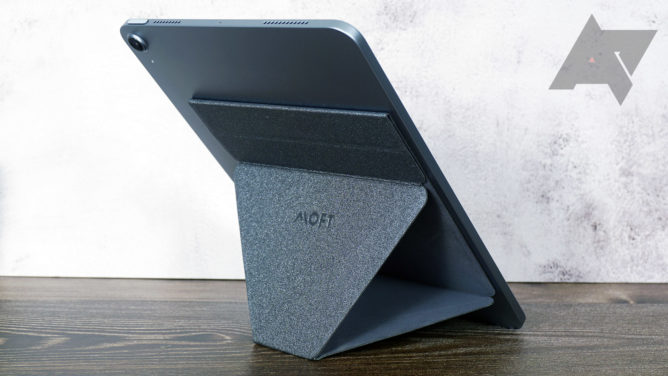 The stand's magnets keep it open and stable when unfolded, such that you'll never accidentally collapse it with an errant finger, and it stays nice and flat when folded up. The only tricky part is figuring out precisely where to place it on your tablet's butt, because it's hard to judge exactly where the "sweet spot" will be to optimally balance it when deployed.

But here again, Moft's excellent design is on display. The adhesive square on the back is some kind of magical mystery glue: it's sticky enough to stay in place without budging, but giving enough to come loose with enough pressure and leave no residue. I've used this thing on four different tablets (an HP Chromebook x2, a Pixel Slate, a Lenovo Chromebook Duet, and the iPad Air in these photos), years apart, and it still has no problem coming off cleanly and going onto a new one. 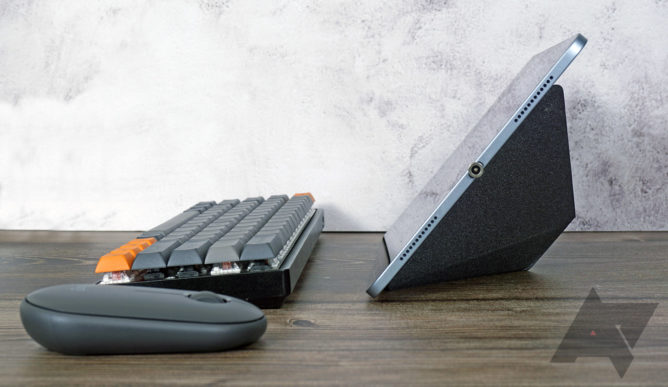 The Moft X Tablet Stand is a little pricey for what it is, at $30. With a size of 150x210 milimeters, it's ideally sized for 10-inch tablets — bigger ones work fine, but an 8-inch tablet is too small. There are mini options for phones, though I can't say I need to prop one up often enough for it to appeal to me.

But it's worth it. Dollar for dollar, the X Tablet Stand might just be the most useful mobile accessory I've ever purchased. Pick one up and forget your travel stands forever.

Microsoft's folding Surface Duo is cheaper than the Pixel 5 today