WhatsApp's controversial new privacy policy is slated to go into effect on May 15 worldwide — except for in Germany. The country has been scrutinizing the new WhatsApp privacy policy since mid-April, and a data regulation body finally decided to enforce a ban on the revision using procedures introduced with the European GDPR (General Data Protection Regulation).

Specifically, the ban was enforced by the Hamburg Commissioner for Data Protection and Freedom of Information, Johannes Casper, who argued on Tuesday that the "provisions on data transfers are scattered at different levels of the privacy policy, they are unclear and hard to distinguish in their European and international versions." He continued explaining how "the contents are misleading and show considerable contradictions. Even after close analysis, it is not clear what consequences approval has for users. Furthermore, consent is not freely given, since WhatsApp demands acceptance of the new provisions as a condition for the continued use of the service's functionalities."

Since the emergency procedure that was used to enforce the ban is only effective for three months, the Hamburg Commissioner is now looking to bring the case to the European Data Protection Board, which could lead to a legally binding decision at the European level — potentially protecting residents of all member states from the new privacy policy. It's even possible that Facebook might be forced to rethink its policy internationally, but in a worst-case scenario, the move could just further fracture and divide the internet.

As you would expect, WhatsApp disagrees with the comments and research conducted by the Hamburg Commissioner. A WhatsApp spokesperson told us,

The Hamburg DPA’s order against Facebook is based on a fundamental misunderstanding of the purpose and effect of WhatsApp’s update and therefore has no legitimate basis. Our recent update explains the options people have to message a business on WhatsApp and provides further transparency about how we collect and use data. As the Hamburg DPA’s claims are wrong, the order will not impact the continued roll-out of the update. We remain fully committed to delivering secure and private communications for everyone.

With WhatsApp's stance that the Commissioner's ban is based on a "fundamental misunderstanding" in mind, we would assume that the company will take its chances in court and try to appeal the order.

Further, the company shared that most users have already accepted the new privacy policy anyway. It probably helped that the banners reminding people about the upcoming changes have grown increasingly bigger and harder to ignore. 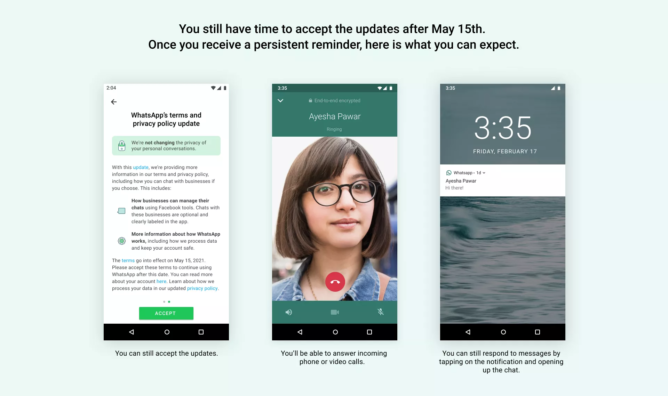 For what it's worth, Facebook is giving users in other countries a grace period of sorts, after already pushing back the initial February 8 deadline. When you don't accept the new policy by May 15, WhatsApp will gradually reduce the amount of features you have access to until you're completely locked out, effectively forcing you to accept the revised legal document if you want to continue using the service. It will never outright delete your WhatsApp account if you don't accept, though.

We've updated the article with a statement from WhatsApp.