Aukey is among our favorite brands when it comes to affordable and powerful chargers, but some evidence is mounting that legitimate reviews might not be enough for the company. A 7GB data leak on an unsecured Chinese server (spotted by SafetyDetectives) exposed a number of Amazon sellers offering customers free products in exchange for favorable reviews, and it looks like Aukey is one of the companies caught in the middle of this scheme. Amazon has taken action and removed almost all products sold by the company.

Looking at Aukey's Amazon page, you'll quickly notice that almost all products it sells have either disappeared or have a "currently unavailable" tag attached to them. The same is true for search. While a few products still show up, with some even available for purchase, you'll mostly only find offers from the competition. 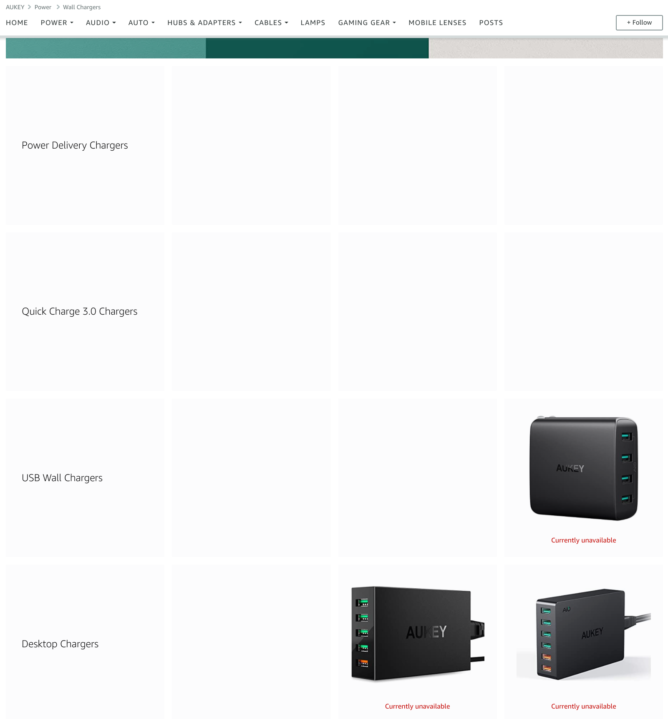 So far, neither Aukey nor Amazon have confirmed that the products have been removed due to the potential fake reviews, though anything else seems unlikely at this point. Amazon's terms of service explicitly forbid fake reviews, and both vendors and customers who forge reviews could face additional scrutiny from regulators due to consumer protection regulations. For what it's worth, Amazon has responded to a query from Review Geek, giving a boilerplate statement on how it works hard to protect the integrity of its store and how it's taking that responsibility seriously.

I'm currently reviewing a standing desk from Aukey, and it came with this note offering $100 for an "honest review," which is against Amazon's seller rules. No wonder Amazon is laying down the hammer. https://t.co/qkfpvbDyln pic.twitter.com/rW3VRcVr3x

It looks like Aukey even went as far as including notes in some of its products asking customers to leave an "honest review" for money, as spotted by Android Police alumnus Corbin Davenport on Twitter. While the company doesn't explicitly ask for fake reviews or even 5-star ratings, offering money in exchange for a review is already enough to warrant sanctions from Amazon.

The server leak also shows that companies additionally engage in messaging campaigns on social media and in text apps. It looks like loyal customers are often asked to purchase a new, largely unrated product on Amazon, with the prospect of receiving a full refund via transfers outside of Amazon after writing a favorable review. That helps companies game Amazon's recommendation algorithms, quickly boosting new products in search.

The problem isn't restricted to the US Amazon store, either. Aukey products are disappearing on the platform in Europe and India, too, with availability slightly varying across different markets.

Aukey isn't the only company affected by the crackdown. It looks like Tomptop and a few other big companies are also part of the scheme. With fake reviews being hard to spot, I wouldn't be surprised if even more businesses engaging in these practices will surface.

With the fake reviews all but confirmed, it's a shame that Aukey apparently felt the need to engage in this practice. Its products routinely managed to convince us due to their affordability and quality, and it seems risky to throw out this good reputation for some extra five-star reviews on Amazon.

YouTube is rolling out TikTok-style Shorts to users globally