OxygenOS received quite the visual overhaul last year with version 11, borrowing some design elements from One UI to improve one-handed use. The OnePlus 7 series was late to the Android 11 party, only getting the update in March — six months after Google released it for Pixel devices. Despite the wait, there are plenty of new features and improvements in OxygenOS 11, and now the T-Mobile version of the 7 Pro and 7T are getting a piece of the action.

T-Mobile hasn't provided a detailed changelog for the update, but it is safe to assume that it's similar to the unlocked versions of the phone, perhaps with a few carrier-specific changes. Here are some of the things you should expect to see (taken from the unlocked changelog):

T-Mobile doesn't say which security update is included here, but the unlocked models were stuck with the outdated February patch. T-Mobile calls it the "Android 11" update, so I imagine this is also using February as well. The OnePlus 7 Pro might be two years old, but having security two months out of date is still unacceptable.

Samsung's Galaxy S9, released over a year before the 7 Pro, has received every patch within a few weeks of release. For a company that tells its customers to "never settle" and uses fast software updates as a main selling point, it seems like OnePlus 7 users are having to do plenty of settling in the security department. If OnePlus wants to charge more money for its devices, it needs to improve support for its older phones.

The update was released on April 9th, so it should be available for you now if you're on T-Mobile.

T-Mobile has released the update for the OnePlus 7T today and includes a security patch as well as the bump to Android 11. The phone had been stuck on the January patch since February 1st, but now users can enjoy the only slightly newer February patch instead.

T-Mobile has posted the Android 11 update for the OnePlus 7T Pro 5G. Since the company's support page is in fact showing the McLaren special edition of that phone, which includes an extra 4GB of RAM (12 total) but is otherwise internally identical to the standard 7T Pro 5G, we're going to assume that both of them are getting the same update. 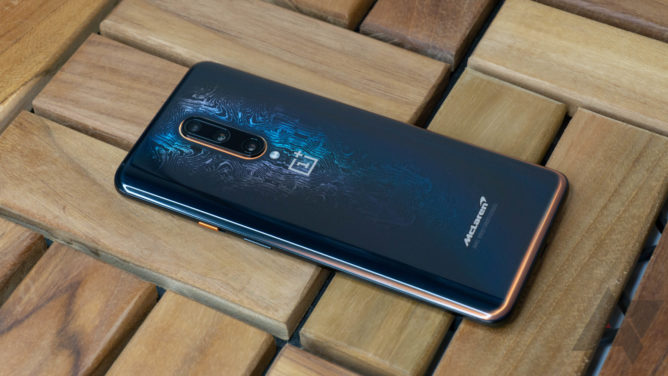 The irony of a phone branded with a world-famous race car getting its vital software updated months after other major phones is, we trust, not lost on any of its owners. Despite being released a month into May, it's still using the April security update.