The ongoing drama between Roku and YouTube TV has, frankly, been hilarious — though it's probably not that funny for customers using the platform since the spat resulted last week in Roku kicking YouTube TV off its platform. While Google has urged affected subscribers to spam Roku's support lines asking to get it back, the company has come up with a workaround for the time being: YouTube TV is now available from inside the YouTube app itself on Rokus.

That's right, YouTube TV now lives inside the YouTube app on Roku OS. This is hardly a solution, but it does mean that YouTube TV subscribers can get their fix even as negotiations between Roku and Google continue. 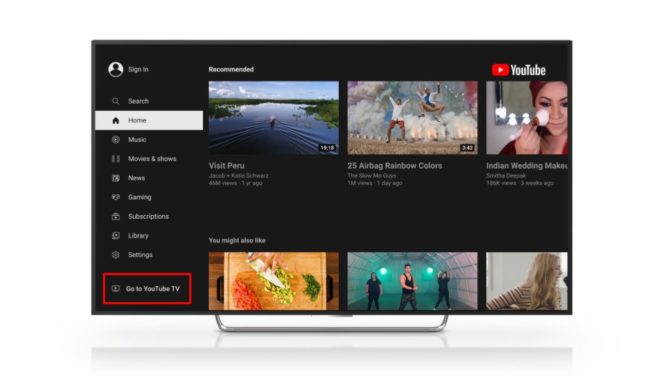 A new "Go to YouTube TV" option should appear in the "left side navigation" menu inside the YouTube app, all the way down at the bottom, and the first time you do it, you'll need to sign into YouTube TV.

Right now, this is only in the YouTube app for Roku OS, but Google's support documents say it will expand to "as many other devices as we can over time," so the feature does sound like it will be permanent. Based on a tweet from the @YouTubeTV account, the feature may only appear for YouTube TV subscribers.

You can't sign up for service with this workaround, either. Google told The Verge earlier today that this is only for watching YouTube TV, not starting new service, and that discussions remain ongoing with Roku. However, since Google also has a Roku renegotiation scheduled for for the YouTube app at the end of this year, the workaround may not last too long, if Roku takes that opportunity to further kick Google to the curb.

The issue itself seems to stem from a lack of AV1 support in future Roku hardware. Admittedly, plenty of Android TV devices and other dongles and home entertainment hardware also lack AV1 support — which has big benefits but increased hardware costs — but we also aren't entirely sure of either the scale or terms of the negotiation between the two companies, merely the details that have been spun off by PR to support the position of each. Roku has grandiosely claimed that this is a fight against manipulated search results, exclusive data, increased consumer costs, and retaliation against anticompetitive and discriminatory behavior. Google has all but called most of those complaints bullshit, pointing out in a recent blog post that Roku has pulled this sort of thing with other providers in the past and that Roku is simply trying to secure an unreasonable exception to future hardware requirements, simultaneously taking advantage of the YouTube TV negotiations to secure better terms in a separate (and early) renegotiation of the YouTube app for the platform.

I can't tell you which party in the ongoing dispute is right, though Roku dropping a new remote in 2021 with MicroUSB is a strong indicator to me they're not exactly interested in pushing the hardware envelope. But, I can tell Roku subscribers that a Chromecast with Google TV or a 4K Fire TV Stick is cheap and easy to come by, and you can watch YouTube TV on either with no drama — at least, outside the televised kind.

Netflix teases N-Plus: A new way to get attached to your favorite Netflix shows before they're ...