Not too long ago, Google introduced global media controls to Chrome on desktops. It adds a button with media playback controls to the right of the address bar whenever you watch or listen to content on any website. While it's already incredibly helpful in its current state, Google is looking to improve it even further, as an avid Redditor found out.

For one, Google is looking to better accommodate media artwork that doesn't fit the standard rounded square mask it uses next to the media controls, as spotted in the Chromium Gerrit. Instead of zooming in far enough to fit the artwork into the square, a new variant fills the rest of the mask with a background color extracted from the artwork, allowing you to view it in its full glory. If no artwork is available, the browser will use the website's favicon instead.

Above: Current look. Below: New look.

Another Gerrit entry shows that Google also wants to make it easier to access cast targets in the media picker. Instead of a generic "Devices" button at the bottom of the picker, you'll get a row of shortcuts to available cast targets, expandable to show you the full list with a click on an arrow button to the very right. Judging from the looks, it sure seems like the interface is meant to mimic Android 11's media controls even closer, save for small differences in iconography and button placement. 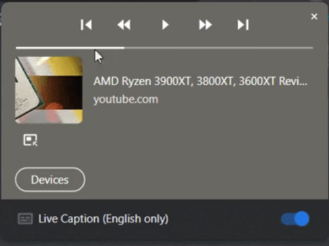 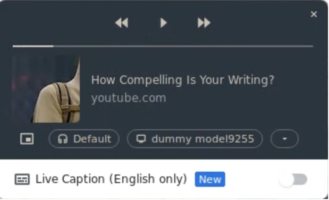 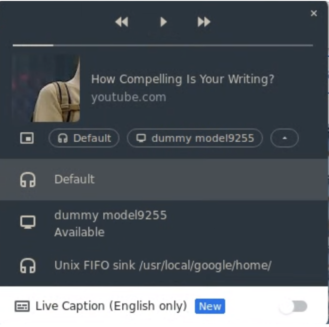 Another interesting tidbit spotted by the Redditor is an entry pointing to the addition of a volume slider and mute button when in cast sessions — you won't need to pick up your phone to do that anymore.

The new features are coming about a month after Google was caught testing the dynamic backgrounds you can see in the screenshots, along with the scrubbing bar also visible in the new screenshots. So far, these features aren't available in the stable version of Chrome, and we haven't found any flags in it that would allow us to activate them.

As with any such change that hasn't been announced yet, Google could remove it anytime, even before it goes live for everyone.

Google would really like you to start using its Photos print service, pretty please