Last year, Wyze made a whole lot of noise about how the new Cam v3 would deliver a bunch of enhancements for the same $20 price. Come launch day, the company couldn't hold true to its word, raising prices to $24 (before shipping) or requiring that you pay more on the side for a subscription service to get that original price. The company even buried those original claims regarding pricing when we called them out for it. Now Wyze is back with another price bump: The Wyze Cam v3 will cost $33. At least shipping is included this time.

It's just one of several products that Wyze's cofounders Yun Zhang, Dave Crosby, and Dongsheng Song said today in an email to customers that the company will raise prices for, due to shortages and rising component costs. Right now, it's just the Cam V3 and the Wyze Video Doorbell, but the company is up-front in explaining that "other products will follow later on."

An ad Wyze would probably like all of us to forget about given it took it down on YouTube.

Before this change, the Wyze Cam V3 cost $30 with shipping included ($24+$6), so this constitutes a further $3 bump on top of that prior complicated price increase when the camera was released. The Wyze Video Doorbell ran $45 previously when taking into account shipping costs, and it's getting a $10 price bump to $55, a 22% increase. Even with this pending price increase, we should point out that the Wyze Video Doorbell isn't available for purchase.

As part of this change, all shipping costs going forward will be merged into product pricing directly as well — though prices are still being increased on top of that change. That means every Wyze product sold on the company's website in the future will include "free shipping" following the adjustment, which makes for a more honest comparison between Wyze and other third-party retailers.

Historically, Wyze has offered some shipping discounts for certain combinations of items, and the company is working on a solution that will provide a similar benefit to customers, but there aren't any details regarding that yet. 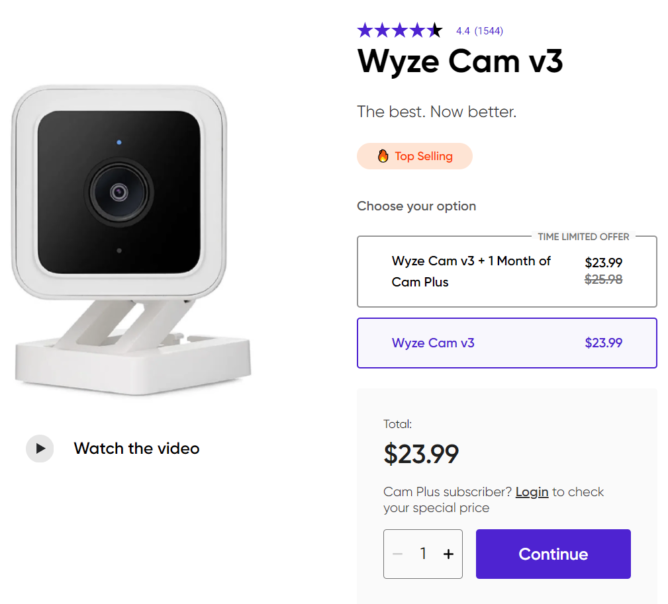 The new prices are not yet reflected on Wyze's website, so if you're hoping to pick up a Cam V3 for the old, still disingenuous $24 + $6 price, you've got a tiny bit of time left to do it before it goes up to $33.

The really unfortunate part of all this is that the Wyze Cam v3 is fantastic and we're generally fans of Wyze's products. We're just not a fan of the company's frequently disingenuous if not outright misleading practices in other regards. The Cam v3's pricing at launch was so complicated it couldn't be called anything but deceitful. Hopefully, with this round of price increases and a move to include shipping, Wyze won't resort to misleading prices anymore going forward.