Thanks to Epic's court case against Apple, a bunch of documents have leaked to the public, and so we've learned through these internal docs that Epic may be planning to bring the full version of Rocket League to mobile. This is not to be confused with Rocket League Sideswipe, a 2D version of the game I went hands-on with in March. Apparently, Epic is planning on creating a new launcher for the PC and console game that will offer the full experience across all platforms, including mobile, with a beta planned for mobile in Q2 2021. 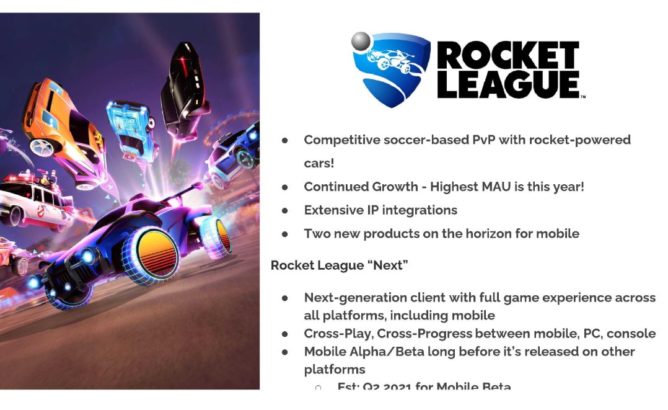 Above, you can view a screenshot of the document in question (via The Verge), and as you can see, it plainly states that Epic is working on a next-gen client for Rocket League that will not only include cross-play and cross-progression across all platforms, but that mobile will be joining the fun with an upcoming beta planned for Q2.

Now, for all we know, the above-documented plan was squashed well before yesterday's court case with Apple since it was originally presented internally at Epic in June 2020. Still, it stands to reason that Epic and Psyonix would want to update the game's aging launcher while widening support to mobile, so it's possible what's detailed above could unfold later in the year.

So there it is. There's a chance the full version of Rocket League will be coming to mobile in Q2, with a new client in tow that will offer cross-play and cross-progression across all supported platforms. As somebody that plays the game daily, this all sounds very promising, so here's hoping Epic will deliver.