When there was a public outcry regarding WhatsApp's change of privacy policy, Signal made most of the opportunity to push its privacy-focused messaging service. Now, the company is taking a dig at Facebook's behavior of commodifying troves of data about its users with hilarious Instagram ads. Signal claims the ads were rejected and its ad account was disabled although Facebook denies this and calls it a stunt. Go grab some popcorn.

Signal designed the multi-variant ads to show us the types of data that Facebook collects and sells access to in a simple and effective manner. However, these ads never really made anyone chuckle (or sweat profusely) since Facebook proactively disabled these ads, according to Signal.

Do you want to guess what you would've seen?

Facebook spokesperson Joe Osborne was quick to shun the claims on Twitter, saying Signal never really ran the ads and that its ad account wasn't disabled for that reason. According to him, the screenshot shared by Signal was from March when the account was temporarily disabled for an unrelated payment issue. For what it's worth, the screenshot shared (seen below) by Signal does seem like it was taken in March — note the dates in the background. We don't know when Signal tried to run the ads, though, so it's very hard to prove either company right or wrong here. 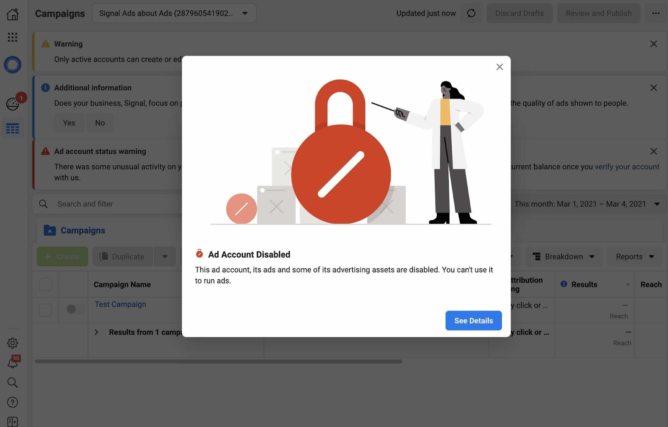 Irrespective of who's telling the truth, the ad campaign brings up an important point — Facebook doesn't want its users to be aware of just how much the company knows about them. We've seen this theme before when WhatsApp clarified what data it doesn't collect (instead of what it does collect) and, more recently, when it pushed pop-up notices asking iOS users to let the Facebook and Instagram apps track their usage in the guise of keeping the platforms free and helping businesses. This very public spat is likely to keep going, so we'll keep an eye on it.