Hisense just announced a whole pile of new TVs  — somewhere around 25 if you count every option for all models, including new sizes and software tweaks for the old ones it's still selling. That's a whole lot of pixels to be pushing in 2021, and the company picked up Community star Joel McHale to sell them to you. Many of the new models are running Android TV, as well — and we mean Android TV, not Google TV. Here's a quick overview of what to expect from Hisense this year.

You don't need to watch this, but it's honestly pretty funny, and you might wanna rather than read. (Editor's note: Please still read our post, too)

Arguably, Hisense has more than one flagship this year, but if I were to pick out a single model as the most desirable, it would be the U9DG. It's only available in one 75" size, and it costs $3,500, but specs impress, with a 4K resolution and an advertised two million local dimming zones — no OLED, if that's what you were hoping for. It isn't clear if that's a Mini-LED situation or some other solution, but Hisense claims a sky-high two million to one contrast ratio and up to 1000 nits peak brightness.

It's running Android TV with Assistant integrated right into it. Hisense claimed staunch opposition to tech jargon in the (honestly pretty funny) announcement, but this TV sports plenty of its own, including Quantum Dot whatever-doesn't-matter, Dolby Vision IQ, HDR 10+/HDR10/HLG, IMAX enhanced, a variable refresh rate, FreeSync support, a 120Hz panel, HDMI 2.1, a "Filmmaker Mode," and Dolby Atmos, plus eARC and WiSA.

The other potential flagship model is an 8K TV called the U800GR. This one sadly doesn't run Android TV, opting for Roku OS instead, and it also comes in just one size/price: 75" $3,200.

Again, you get your quantum whatever, and it's not OLED, but it does offer 1000 nit peak brightness, Dolby Atmos, "480 Motion Rate" on a native 120Hz panel, and 180 local dimming zones, plus 8K upscaling, Dolby Vision Atmos, and AirPlay 2 support. Again, this 8K model will also be available in the same vague "summer 2021."

Working our way down the lineup, we've got a more jack-of-all-trades U8G. It's 4K and still just LED/ULED, but this time around, it has Dolby Vision IQ, a rated 10,000:1 contrast ratio (courtesy of up to 360 full-array local dimming zones, presumably varying based on size), a 120Hz panel, 1,500 nits of peak brightness, and the same branded IMAX enhanced, filmmaker whatever, Dolby Vision IQ, Dolby Atmos, HDMI 2.1,  eARC, and WiSA-ready support. There's also HDR10+/HDR10, and variable refresh rate with FreeSync Premium.

The new U7G series picks up where the H8 left off, and it's targeting gamers, with features like Game Mode Pro (which some of the other TVs like the U8G also have). It's a suite of features that includes things like automatic low-latency mode, FreeSync Premium, and variable refresh rate support for reduced input lag. It's running Android TV, and will be available in "summer 2021" in three sizes: 55" ($750), 65" ($949), and 75" ($1,400).

The U7G inherits many of its features from the H8G we reviewed last year — and which was pretty great and had stellar picture quality, though an issue prevented us from giving it our full recommendation. The panel supports up to 120Hz natively, with up to 120 full-array local dimming zones and 1,000 nits brightness, plus HDMI 2.1 input. And again: "Filmmaker Mode," Dolby vision IQ, HDR 10+/HDR10/HLG, IMAX enhanced, Dolby Atmos, eARC and WiSA ready.

The U6G is even more affordable, though probably a little less interesting for our spec-obsessed readers. Still, its trimmed-down hardware is likely to sell even better than the higher-end versions most will be salivating over.

The U6G offers 60Hz panels, with up to 60 full-array local dimming zones and 600 nits of peak brightness. It's still HDR10/HDR10+/HLG compatible, with Dolby Vision and Dolby Atmos, and it's running Android TV, with Assistant integration and a voice remote.

Hisense is also introducing a new 120" L5F short-throw laser projector. While its picture "exceeds the standard 4K color range" and it runs Android TV, don't expect quite the same specs that the dedicated panels have. However, it does have a "perfectly paired" 120" ALR projector screen, so you don't just have to point it at a wall or buy your own, plus built-in speakers. 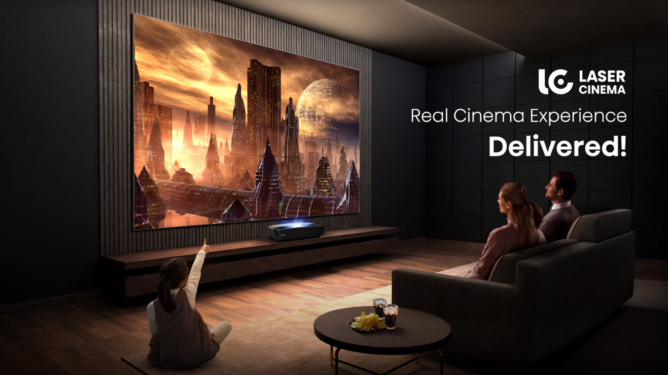 Hisense also announced a handful of new size and platform options for the A6, R6, and R7 series, including expanding support for those models to encompass more operating system variants, letting you choose between Roku OS, Android TV, and Hisense's own VIDAA. Prices and availability are below:

We aren't sure if we'll get a chance to take a look at any of this year's models, but if and when we do get the opportunity, we'll let you know how they stack up against the other Android TV options.