Android tablets are in rough shape these days. Sure, a few are worth picking up, but they tend to aim towards the budget-friendly market. Thankfully, at least one manufacturer is keeping Android tablets interesting. While Lenovo's slates aren't all home runs, they almost always sport unique designs, like smart display docks or weird digital keyboards placed along the side. The company's next tablet has an all-new feature that might make it even more appealing to anyone looking for some extra screen real estate while on the move.

Announced on Lenovo's Weibo page and spotted by XDA Developers, this new Yoga tablet seems like a relatively standard gadget with one new utility: an included HDMI input. So, in addition to running apps and games, this latest tab can act as a secondary portable display. It's certainly something that no other mainstream Android device has in 2021.

The announcement was light on details — no information on specs, pricing, or availability to speak of — but with the included render, we can certainly speculate. Lenovo is promoting the tablet as a way to play games on the go, showing Mario Kart 8 Deluxe on a much larger display than what the Nintendo Switch can offer. The wide base along the bottom means it's primarily designed for landscape use, and it seems like a kickstand is helping to support it in an upright position. 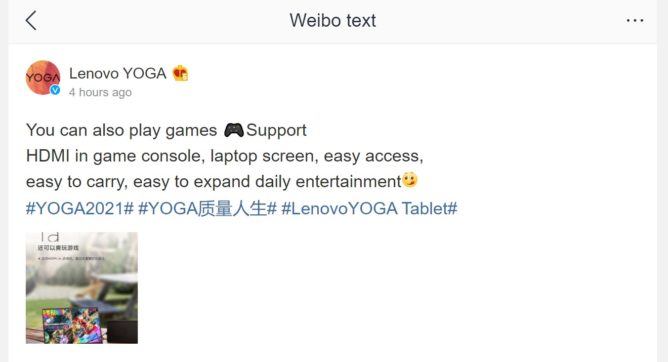 HDMI-in might seem like a small addition, but it could help set apart Lenovo's tablet from the pack. While the Switch is an odd example — it's specifically designed for gaming on the go — being able to throw an Xbox or PS5 in a bag alongside your tablet when you're out on the road would make for a pretty cool experience. It's easy to see this as a productivity tool as well. Just run an HDMI cable from your laptop to this tablet, and you've effectively doubled your screen real estate.

We'll have to wait and see what else Lenovo's latest gadget is capable of doing, or if it's even coming to regions outside of China at all. This single feature could just push Android tablets to mass market adoption — or it might just be a cool novelty that goes nowhere. Either way, we'll keep an eye out for more information on specs and availability.