A handful of renders and what is claimed to be a promotional video for Samsung's upcoming foldables have been circulating today, ostensibly showing off the Z Fold3 and Z Flip3. While we remain a little skeptical and cannot corroborate the details with our own sources, a handful of known leakers are convinced, and a few key details do jibe with what we would expect. Still, some design details are a little unusual, so take the news with an appropriate (if not massive) dose of salt. The most immediately noticeable change for the Z Flip3 is the new dual-tone design, reminiscent of the "panda" Pixel 2 — unarguably the most attractive Google-designed phone of all time, and we will not accept corrections regarding this. However, in this case, it's more than just a design choice, as this "color block" on the top back actually houses a bigger rear/outside display, plus a dual-camera setup. 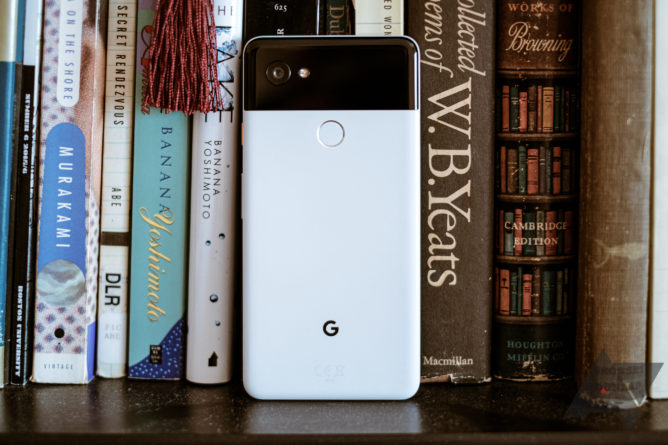 The most attractive Google phone: The panda Pixel 2 XL.

Text included in the image indicates it might be swathed in Gorilla Glass Victus on the back. Sammobile believes it will be paired with something called "Armor" on the hinge and display. (Samsung recently trademarked "Armor Layer" and "Armor Skin.") Four colorways are shown: white, purple, beige, and green.

It appears like most of you still do not believe the Z Fold Series leak is actually real.

Well, I don't blame you. But just look at this GIF I took from the "original" video.

That looks way too real to be fake. pic.twitter.com/73RDnnLwWV

A video included with the leak, with identifying information censored out, shows the screen in action across a couple contexts, including receiving messages and music controls.

The overall design of the depicted phone is a little more square and blocky than the prior Z Flip, but the curves and cuts where the glass backs meet the metal frame are very similar. The biggest departure in design is the new camera layout, which appears to use separate covers for each lens assembly, rather than a single cover for both. The images for the Z Fold3 show a few significant details. For one, the phone may have an under-display camera, which is pretty snazzy technology and which we haven't really seen in the US yet. It may also boast an S-Pen, which agrees with information we've previously heard, though it might be a little different than the S-Pens we're used to from prior Note phones. Both the interior and exterior displays could be 120Hz panels.

See the front and the UPC . pic.twitter.com/tW9eVhJ5dL

Images of the back of the Z Fold3 also show similar round camera lens covers, like the Z Flip3, but conjoined together in a single plateau. It's a pretty strange look and a significant departure from prior models, but within the realm of possibility. Colors may include Beige, black, green, and silver.

Sourcing for these leaks varies quite a lot, and they have been redistributed so many times we're not fully sure of the provenance, though they may have come from @rLeakswondering, @sondesix, or @BuKarpiel. In any case, they're almost entirely from people with less of a track record than we're used to reporting on, which gives us pause, but a handful of details do corroborate what we otherwise expect, and @UniverseIce and Roland Quandt seem to be convinced. In short, they meet a higher bar than the usual slashleaks content, though we could be more confident in them than we are.

Samsung isn't shipping out a Galaxy Note this year, but that doesn't mean it won't announce any premium flagships in the second half of the year, and we've heard rumblings of Galaxy foldables for a few months. If they pan out, these leaks could be our first glimpse of the Z Flip3 (assuming that's the name it goes by) and the Z Fold3. Just don't get too excited or upset just yet. Though we're willing to point out these leaks as a possibility based on a handful of trusted names being convinced and a few plausible details, we have yet to corroborate them and remain just a little skeptical.

Box finally has a dark theme, but not without one annoying limitation