Ultra-wideband support is a hot ticket in the phone world right now. The latest models from both Apple and Samsung support it, allowing them to work with branded tracking devices (the new AirTag and Galaxy SmartTag+, respectively) that can show you where a lost item is with augmented reality, among other things. According to a trusted source, that capability may make its way into future Google hardware.

Mishaal Rahman, the editor-in-chief of the XDA-Developers blog, says that he's heard that Google is testing ultra-wideband API support on devices that may (or may not) be an upcoming Pixel phone. 9to5Google later corroborated the information.

I've just been informed that Google is testing support for Android 12's Ultra-wideband (UWB) API on "raven", one of the code-names that could belong to the GS101-powered next-gen Pixels.

"GS101" here is assumed to stand for "Google Silicon." It's a term that's already been spotted in some products claimed to be packing a processor designed specifically by and for Google. That would presumably make it one of the first, if not the first, Pixel phone sporting a Google-branded processor instead of a Qualcomm SoC. 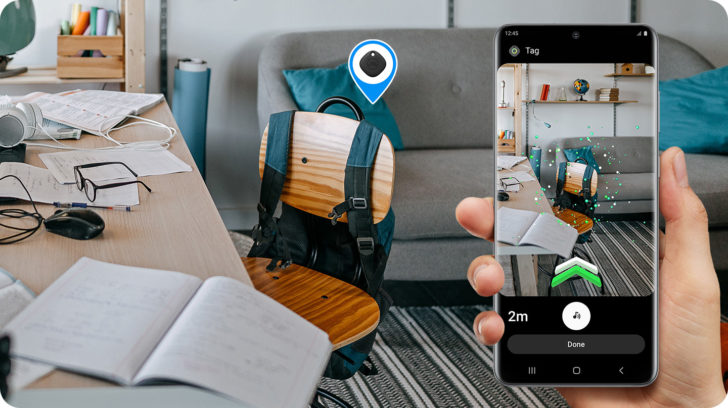 Samsung's Galaxy SmartTag+ can display its location to Galaxy phones in augmented reality.

Normally we wouldn't pass comment on something like this, but frankly, we think Mishaal would never post it unless he was very confident in both his source and the accuracy of the information. And it's not as if it's an uncommon practice for a major phone manufacturer to create feature parity with its competition on upcoming hardware. UWB can also be used for proximity detection, as in easy pairing, file sharing, or security verification.

That said, treat this as the rumor that it is until concrete details are more widely available. Assuming that Google is working on either UWB compatibility with existing products or creating new products of its own, it's entirely possible that the company could scratch those plans before the next hardware cycle. (It's happened before.) Mishaal goes on to say that he doesn't have any confirmation that the Raven codename refers to a specific Pixel phone, or that Google is working on an AirTag-style UWB tracker.

Amazon Echo Frames review: About as useful as an Echo Dot taped to your forehead

Weekend poll: How do you play mobile games — if you do at all?