Google pushed live its schedule for Google I/O just yesterday. Of course, we may see the events listed change over time — Google does like to keep a handful of subjects secret until they're announced — but there are already a few must-watch events. I've taken a look at the full list, and while you should keep that schedule open for additions, here are my recommendations.

Before I dive in, I'd like to point out that developers should probably disregard this list entirely. Google I/O is a developer conference, after all, and most of the talks deal with technical subjects. If you're hoping to tune in on the latest Kotlin changes or TensorFlow tweaks to make better apps, some of the things we point out might be a little too high-level — you know what subjects you should watch. And if not, just do a search for any terms, languages, or concepts you might want to learn more about, and maybe tune in to the top 12 tips to get ready for Android 12 and optimize your Android games and apps to run on Chrome OS. Our list is for laymen and Google gadget enthusiasts. 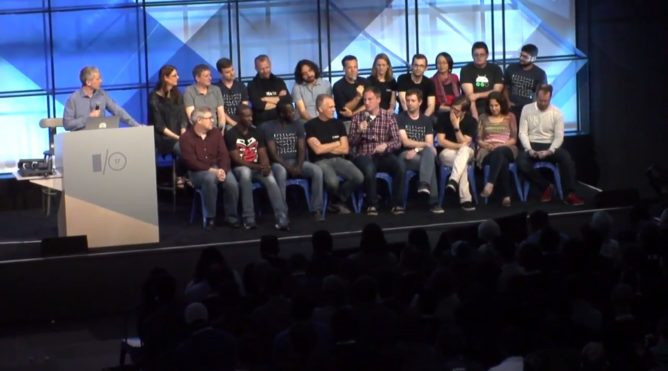 No fireside chat this year — sorry.

On that note, this year's schedule feels a little odd. For example, Google confirms to us that there's no Android fireside chat planned this year, the AMA talks basically replace it. Most of the interesting art- or culture-focused talks are also gone. (I really love those.) I think it's possible, if not downright likely, that the schedule could yet change, and more events might be added later. But, Google may have also intentionally cut things down given the remote nature of this year's I/O. In the meantime, though, Google's titling strategy for the general-impact talks makes things feel a little repetitive.

This is the big one, the one you can't miss. Whether you're a developer, a root-and-ROM enthusiast, or just some guy with a phone and you're pretty sure there's no apple on the back, Google's going to talk about things here that make the news. It's the highest-level overview of not just the state of Google's various apps, services, and products; it's where any big announcements are most likely to happen. 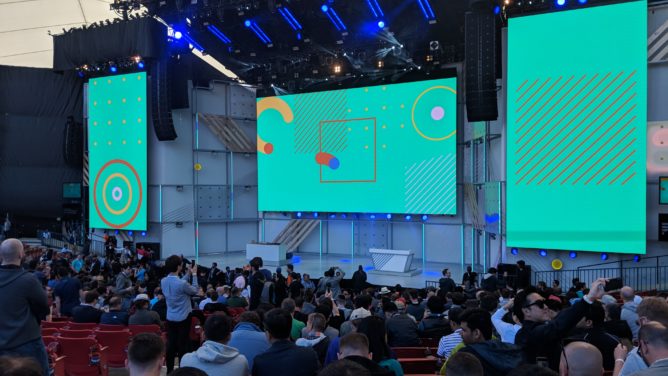 It won't be in-person like this, but it's still the #1 talk to watch.

There will be plenty of other information that comes from Google's three-day event, and lots of smaller talks and discussions bear surprising fruit with Googler's dropping sudden announcements or changes in the middle of otherwise technical minutiae, but this is the choreographed, fully scripted event where Sundar Pichai is most likely to bring up big changes.

I know, the vast majority of this talk will go over non-developer heads, but it's still worth a watch. Sometimes Google drops pretty big changes during this more technical brief, even explaining the impact in very plain terms — almost as if the company ran out of time during the normal keynote.

It's likely to be less dense in terms of big announcements than the primary keynote, and most of the changes are going to be smaller or more technical, but if history is any indicator, it's still worth tuning in at 3:15 PM ET on May 18th.

Most of the non-keynote events that deal with Android at a high level are "what's new in" talks. There's at least one you should tune in for: What's new in Android. While most of it will be pretty technical, there are sometimes interesting user-facing details, and Chet Haase (one of the presenters) is always an entertaining character. 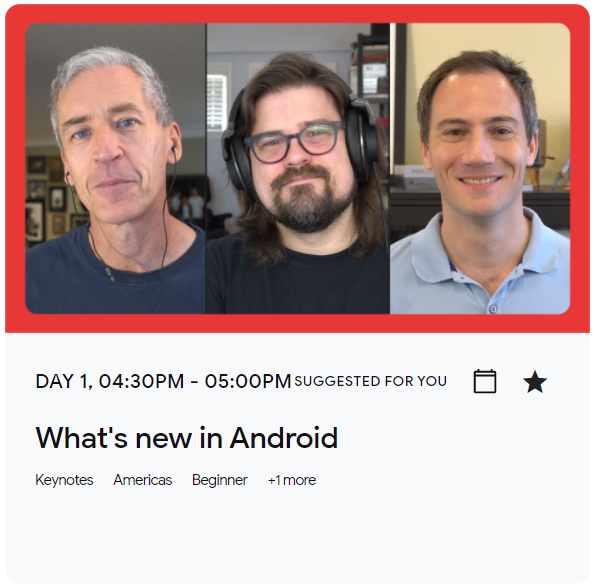 If you're willing to attend to (or suffer through) more technical matters in search of fun factoids, we have a few other "what's new" talks to recommend, like What's new in Android TV and Google TV, What's new with Android for Cars, What’s new in foldables, tablets, and large screens, and What's new in Google Play. But, separately from that, there are four others we also recommend.

Now is the time: What's new with Wear

It's tough to gauge Wear OS's success in the market, but anecdotally, it earns a lot of hate. But a handful of talks at this year's I/O imply we might see some big changes when it comes to the platform, apparently starting with a name change. Wear OS may just be "Wear" going forward.

It could just be title simplification on Google's part, so don't plan around the change just yet, but the descriptions sound like a rename may be coming, and this wouldn't be the first. It started life as Android Wear, and it has held its current name since 2018. Given the frequent criticism it has faced and the as-yet unsubstantiated rumors of a Pixel watch, another rebranding might be planned to avoid the prior name's negative press. But whether it's Wear OS or Wear going forward, the "Now is the time: What's new with Wear" talk will be on-demand, available any time, and is probably worth watching.

We know that big changes are coming when it comes to user privacy in Android and, well, What’s new in Android privacy is all about that. So far, Google's stayed silent about the privacy indicators that it's been developing for the last couple years, but we do expect they could finally appear in Android 12. Since Google has a habit of announcing big features for upcoming Android releases at I/O, there's a good chance we'll hear about them during the keynote — and a deeper dive into the changes during this talk. 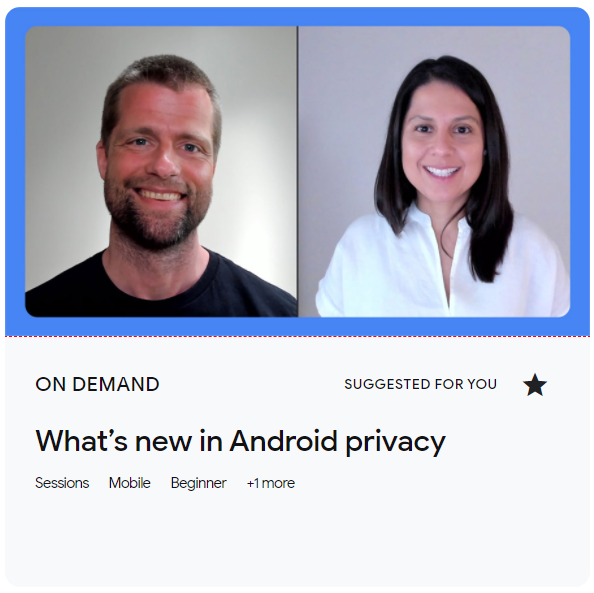 Given the attention that mobile platform and ad-tracking privacy is finally (and deservedly) getting in the wake of Apple's big move in iOS 14.5, this is one talk I'd be sure to watch. Sure, it's likely to be mostly developer-oriented, but some of the subjects and ideas will be self-evident whether you speak Kotlin or not, and you can tune in any time.

In the same vein, we know that Google is in the midst of a big "Material NEXT" redesign for its trademark Android visual language. Right now, things are in flux, and the Android 12 Developer Previews offer our earliest glimpse at the changes to expect. With Android 12 news expected to land at I/O, the transitive property would indicate Google may take this time to unveil the Material NEXT design paradigm to the world — though if I had to guess, probably not under a whole new name like that.

Material has been an ever-changing set of standards, and "NEXT" likely just indicates the latest changes. But, whether you're a developer interested in maintaining a stock-compatible look, or an enthusiast that simply likes well-designed apps, I would tune in to this one. It's at 1:15PM on May 19th, and it's just 15 minutes long.

"Refreshing widgets" — you heard me right

I know this might sound out of left field, but it could be interesting. Google has a talk planned that claims to touch on a new look for widgets in Android 12. So far, we haven't actually seen any big changes outside rounded corners and the new conversations widget, so it sparks the imagination: What might Google have planned? 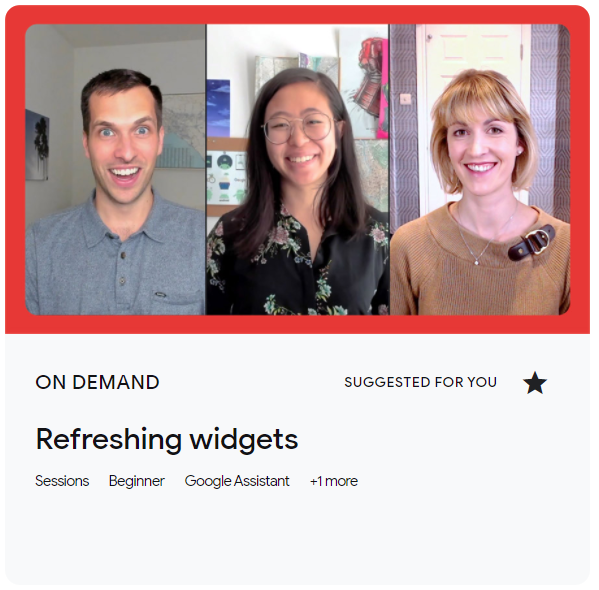 On top of that, the subjects named in the talk's description imply that widgets will have a new impact on or be affected by the Google Assistant as well. That's all pretty dang curious, and I'm not quite sure what to expect, so this is near the top of my list to watch, and it should probably be on yours, too.

It's on-demand, so you can watch it any time. 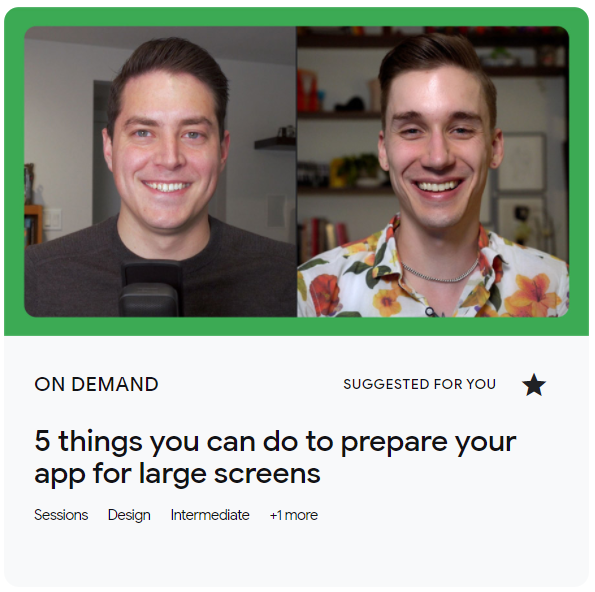 Android Police alumnus Liam Spradlin is probably the world's best software interface designer behind Matías Duarte — we're not biased at all, clearly. Whether you believe that or not (you should), he does have an on-demand session regarding big-screen app design that could be fun to watch, if for no other reason than you'll have the precise terminology under your hat to describe exactly why Android apps on tablets continue to be mediocre. And any of our readers that are developers should pay close attention to the things he says. Plus, it's on-demand, so you don't have to plan your schedule around it.

My own schedule will include a whole lot more than just these talks, and there are a few I'm simply curious about outside coverage here at Android Police, like "Spotting and solving everyday problems with machine learning" and the AMA: #AskMaterial. Some of our readers considering getting into app development may also consider meetup events like Women in Voice Meetup, [email protected] en Google I/O, and Women Techmakers community Meetup (none of which have links from the Schedule page, for some reason).

Google is facing even more flack for FLoC from the EU

The Pixel 4a probably was meant to come in more colors