Television has evolved a lot over the last decade, but there's one thing that has outlived the decline of cable: carriage disputes. YouTube TV might not be a "traditional" cable service, but it's still susceptible to the same issues that every distributor has faced. Today, Roku is warning users that YouTube TV could be dropped from its devices in the coming days should Google continue to pursue its new contract.

Roku has gone public with its ongoing YouTube TV negotiations in an email sent out to its customer base this morning, and it's not holding back. In no uncertain terms, the company accuses Google of using its "monopoly power" to bully it into accepting a new contract. While most carriage disputes revolve around one party requesting additional revenue, this fight sees Google asking to boost YouTube to the forefront of Roku's interface.

As reported by Axios, Google is looking to position YouTube as the premier streaming destination on Roku, requesting a dedicated search page, boosted music results, and a full block on search returns from other sources while the YouTube app is open. In perhaps its most brazen move, the company has reportedly asked Roku to meet specific hardware requirements to continue carrying its apps. On paper, none of these demands have anything to do with YouTube TV. Instead, Roku alleges that Google is using negotiations for its cable streaming service to gain leverage for YouTube as a whole, a move labeled "anticompetitive" in this morning's email. 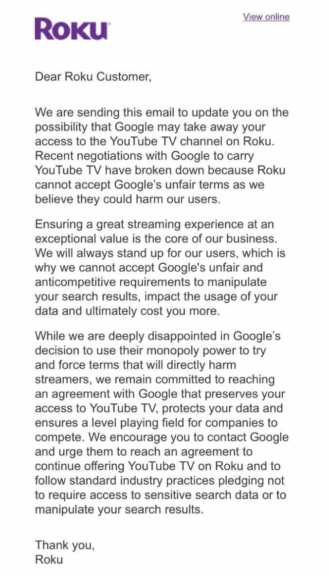 Roku has refused to sign this new contract, which could result in YouTube TV being pulled from the company's devices. In a very traditional move, the email ends by asking users to petition Google to continue offering its cable replacement on Roku. For its part, Google provided a statement to The Verge, calling the allegations "baseless" and denying having made any "requests to access user data or interfere with search results."

It's unclear if the standard YouTube app is also at risk of disappearing, but Google does have a long history of dropping its applications from any platform not willing to play ball. Though these sorts of disputes almost always end with quiet settlements, customers of both Roku and YouTube TV might have to suffer through a disruption in service before anything is resolved.

YouTube is mounting its own public relations campaign in its dispute with Roku, telling YouTube TV subscribers that it has offered the same "reasonable" terms under the current agreement for renewal to the OTT company and wants to continue the agreement. Customers are advised to cast YouTube TV from another device to their Roku box should Roku pull the app. The company is also urging them to pressure Roku by calling customer service or complaining via Twitter to keep YouTube TV.

The full text of a YouTube TV email to subscribers on the matter follows:

Our goal with YouTube TV is to offer you the content you love, delivered in the way you want — including on all of your favorite devices. To make this happen, we enter into agreements with partners in order to enable access to YouTube TV via different devices.

Unfortunately, despite our best efforts, we have been unable to reach an agreement with Roku. We continue to offer Roku the opportunity to renew the YouTube TV deal under the existing, reasonable terms.

If you are not currently using Roku, you should not have any issues. For our Roku users, as we send this, you still have access to YouTube TV on Roku devices; however, Roku may choose to remove the YouTube TV app from their devices. We encourage Roku to continue providing the YouTube TV app for our mutual users.

Should Roku decide to remove the YouTube TV app from their platform, you can still cast to your Roku device from your mobile device, tablet, or computer by following these simple steps. You can also continue to access the app using all of the devices listed here.

In light of Roku’s current stance, we encourage you to reach out to their customer support team to request they keep YouTube TV on Roku devices here or tweet @roku.

We are committed to ensuring our members continue to have access to YouTube TV and will continue advocating on behalf of our members. For further updates on this issue and our efforts to resolve it, please visit this website.