After months of rumors about a potential Spotify price hike, it's finally happening. Affected customers have been sent emails with the bad news, and the new pricing model is set to come into effect from June 2021 for current subscribers and from the end of April for new users. The change impacts Premium Student, Duo, and Family plans in Europe and the UK, with your monthly fee set to go up by around £1-2 (€1-3). Folks in the US are luckier, though, with only the Premium Family plan affected by a single dollar. We should point out that in all cases, the "standard" Spotify Premium plan is unaffected — for now.

This doesn't come as a huge surprise since the company was found surveying users about a possible price increase in recent months, but that will do little to soften the blow. I myself received the email below telling me I'll have to pay an extra £1 per month for my Premium Duo subscription. 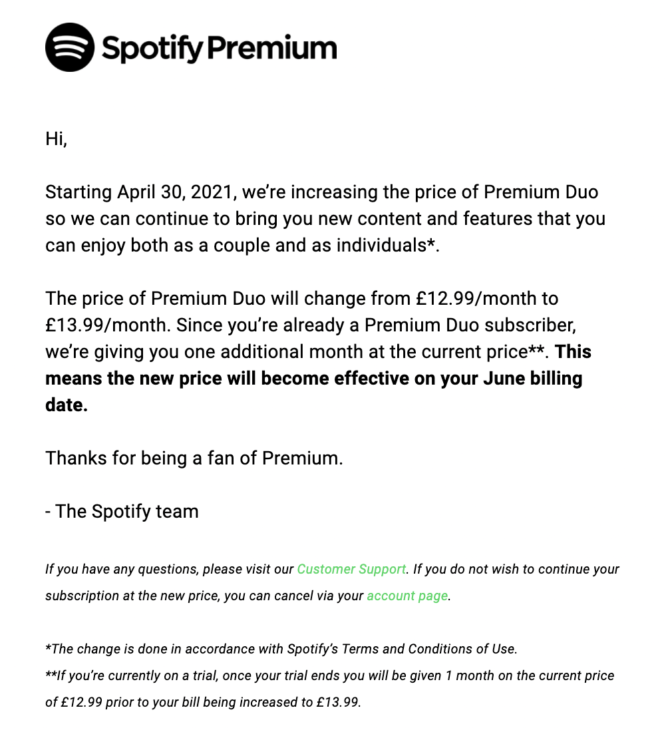 Since I split my account with my partner, that doesn't seem so bad, but spare a thought for students who will also take on a £1 per month increase. Between angry Twitter responses and details provided to The Verge by Spotify, we know precisely which plans are affected and by how much:

European pricing may also vary slightly between individual European markets, and The Verge was told that similar increases would happen in Asia and South America, though specific countries weren't mentioned. Prices kick into gear next month.

Subscribers are naturally pretty upset by the news, with many questioning whether this will mean an increase in earnings for artists. It's also feared that increased subscription costs will push users back towards the dark old days of rampant piracy. YouTube Music and Apple Music can expect an influx of new customers in the coming months if Twitter is anything to go by.

According to Spotify, the price hike is so it can "continue to bring you new content and features." What's more telling, however, is that the company is set to report a significant downturn in new subscribers. If the proceeds from the updated pricing end up going towards strange and pointless hardware products such as the Car Thing (real name), Spotify can expect an even greater backlash.

The Verge has confirmed individual plan changes with Spotify, as well as confirming that the price changes also impact the US, but just for family plans. Our coverage has been updated with these details.

How to get a pair of Surface Headphones for just $82

Spend some of the money you saved on the gym last year to get a Fitbit Versa 3 — now at an ...