Bluetooth helps link your smartphone with your car, and already grants you the power to play music wirelessly over the sound system, pull up audio cues for road navigation, and enhance the hands-free calling experience. Now imagine also using Bluetooth to perform vehicle diagnostics without an expensive visit to your mechanic, right from the comfort and convenience of your Android device.

This is all thanks to the venerable OBD-II port, also known as "On-Board Diagnostic 2," that's found on virtually all modern vehicles (per a US government mandate dating back to 1996) and offers an I/O port for vehicle diagnostics, filled to the brim with untapped potential. In days gone by, dedicated OBD-II scanners were generally designed with basic, two-line error code readouts that made the prospect of deciphering them nothing short of obtuse. Feature-rich units with full-color screen readouts and support for additional plugins could often cost anywhere from $500 to upwards of $1000 for a complete kit. Thankfully, with any reasonable spec Android phone or tablet, a Bluetooth-based OBD-II scan tool called BlueDriver is available as an interesting alternative that is quite feature-rich.

To put it mildly, this isn't your father's OBD-II scanner. The BlueDriver system consists of two parts: the Bluetooth-to-OBD-II dongle, which is currently listed on Amazon at the down-to-earth price of $99.95, and the BlueDriver companion app, which can be downloaded from the Play Store. Not only are you able to read error codes that are kicked out by your car's or truck's ECU (that's its engine control unit), but you can also measure vehicle stats in real time, such as engine RPM, potential cylinder misfires, smog check readiness, and detailed vehicle information. 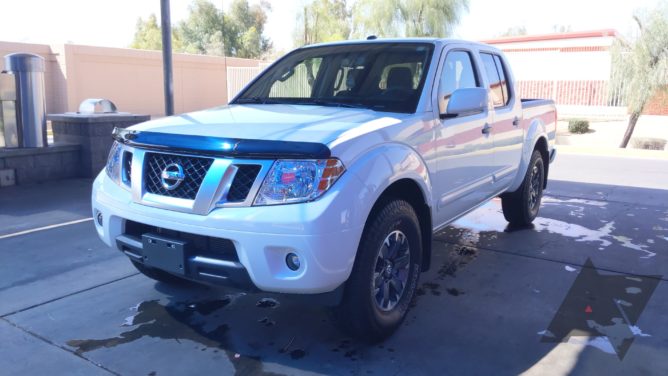 My personal Nissan Frontier PRO-4X was utilized in this fun scanning experiment.

Per BlueDriver's documentation, it's recommended that the driver starts the engine before plugging the Bluetooth OBD-II dongle in place. Shortly thereafter, a blue LED springs to life, signaling the device status as needed. After pairing the dongle to an Android phone or tablet, the driver then launches the BlueDriver app to initiate the full diagnostic scan. A thorough examination can take upwards of five minutes or more, depending on the number of subsystems BlueDriver must query. 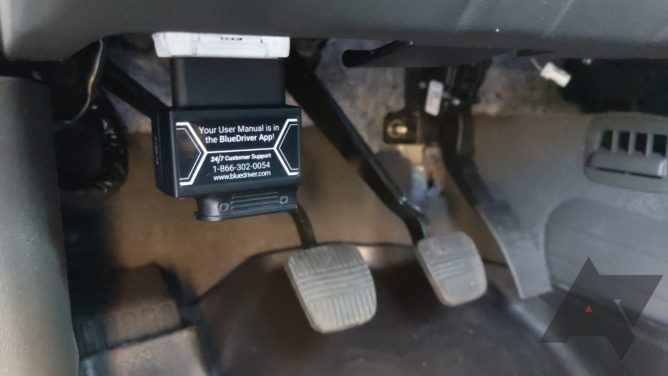 The BlueDriver OBD-II Bluetooth dongle is a snug fit, so care must be taken when plugging it in.

When codes are revealed by the BlueDriver scan, reports for them can be opened individually to bring up helpful details, such as possible causes and frequently reported fixes by the BlueDriver community. To further emphasize the sharing aspect within the app, a prominent "Report Your Own Fix" section is present to allow the user to submit their solution to the BlueDriver database on that particular vehicle. Beyond dealing in standard-issue OBD-II trouble codes, BlueDriver also offers a pretty interesting live-logging tool. The feature gives drivers driver the ability to assess potential problems during active vehicle operation — not just after the fact, when codes are eventually flipped on by the ECU. Measurable aspects of a vehicle, such as fuel system status, engine coolant temps, and vehicle speed, can be added and removed to this display at will, via the app settings. BlueDriver suggests having no more than five active at a given time.

Once the desired modules are enabled, the driver simply fires up the live monitoring system, drives their vehicle around like normal, then makes their stop before ending the data collection session. BlueDriver will then generate the data set in a CSV file for use in additional analysis and troubleshooting, complete with timestamps of each event, down to half-second intervals.

Reports generated over time are kept for quick retrieval and reference purposes, via the Saved Reports menu item. And, should you decide to use your BlueDriver dongle on more than one vehicle, the app can organize records by VIN, avoiding confusion on which vehicle generated what error codes. Say goodbye to jotting everything down by hand on a notepad!

On the whole, BlueDriver is a compelling offering for veteran and novice DIYers alike. Uncovering error codes lurking within the ECU and monitoring a vehicle in real-time goes far above and beyond the standard fare found at AutoZone.

While there are plenty of competing Bluetooth OBD-II dongles on the market, including some much cheaper bare-bones models, you're really paying for two things here: the polish of BlueDriver's excellent app, and the ability to expose issues that are considered beyond the scope of standard dongles, such as detecting fault codes from climate control, anti-lock braking, transmission, and airbag subsystems. If all you care about is basic engine codes and clearing them after a quick read, the cheaper OBD-II dongles, like the OBD-II Diagnostic Interface by Bafx, should do just fine for you. That said, if you want a more holistic soup-to-nuts scanning kit, this accessory is certainly worthy of your attention.

Registration is open for early access to The Witcher mobile game