Facebook's Android apps are rarely the best way to actually use Facebook on smartphones. That's why various third-party options have sprung up over the years, giving users better interfaces, smaller and faster apps, and just generally improving the experience. But it looks like Facebook is tired of being shown up: two popular "wrappers" for the site, Swipe and Simple Social, have disappeared from the Play Store.

According to messages from the developers of both apps, Facebook is siccing its lawyers on multiple apps that offer an alternative way to access the network, beyond the official apps and the mobile site. The developer of Swipe for Facebook posted this message to the app's subreddit:

It is with a very heavy heart that the day has finally come to say goodbye to Swipe for Facebook.

Today, I have received a cease and desist letter from some attorneys representing Facebook Inc. My social media accounts on Facebook and Instagram have also been permanently disabled (unfortunately locking me out of tons of memories over the years and contact with many distant relatives). I believe this has happened to numerous other devs as well meaning the day of Facebook wrapper apps have finally come to an end.

Because of all this, I have pulled both Swipe for Facebook and Swipe Pro for Facebook from the Google Play Store. The app will still function for those of you who have it, although I do not know for how much longer.

Forcing a developer to kill an app that's been popular for years is already pretty heavy-handed, but nuking said developer's personal social media profiles as well shows that Facebook isn't pulling any punches. Its aim appears to be shutting down all third-party tools for accessing the site. 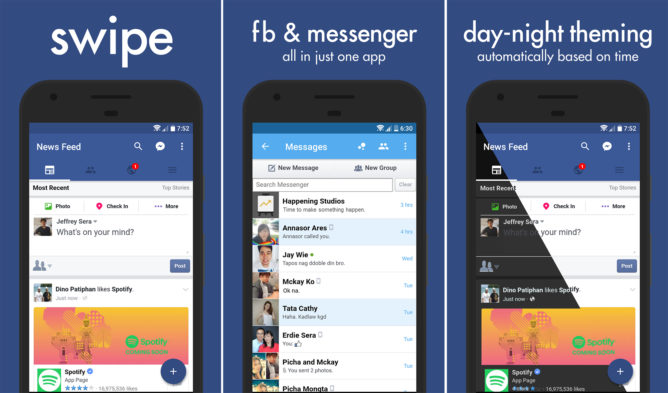 The developer of Simple Social, another popular Facebook "wrapper" app, had an even more alarming message for users. It was delivered via a pop-up notification for those still using the app after it was removed from the Play Store.

Due to changes created by Facebook, Simple Social is no longer supported. You can continue to use Simple Social, however YOU DO SO AT YOUR OWN ACCORD. Your Facebook account may possibly be disabled temporarily or permanently, which is not under the control of Creative Trends. Sorry for any inconveniences this may cause. Thank you for all your support over the last 5 years. Have a great day.

...I did however remove Simple Social and Simple Lite because of threats other devs have received. The Swipe dev received a cease and desist and his personal account has be deactivated. Simple was removed because [I] really don't want to loose my personal Facebook account. However, it's not because for what you referenced... It's because most... If not all wrappers get (public) Facebook data. Example.. Simple only did so to show a user their information, profile pic, and name. I also saved their cookies (like Facebook does in a browser) for faster account switching. Facebook also wants other things from all of us for hiding their sponsored posts (which is done with easy CSS).

The apps appear to be functional if you still have them installed, at least at the moment. That makes sense, as most of them are basically enhanced, low-profile wrappers for the mobile version of the Facebook site. Some also include access to Facebook Messenger, since Facebook itself divorced that functionality into dedicated apps long ago. Without support from their developers, and with Facebook's apparently active attempts to shut down third-party methods of access, there's no telling how long these apps will continue to work.

Changing your App’s core functionality or data Processing so that Users would view it as an unfamiliar or different App, or materially changing the scope of Processing of previously collected Platform Data, unless in each case you first re-submit your App and receive our approval through App Review.

Apps that merely access Facebook (especially without touching Messenger) may not have to adhere to its developer terms — after all, a web browser doesn't need to comply to Facebook's rules just to display the page. But presenting an app as a means of accessing Facebook, even if you make it clear that you're a third party developer and aren't representing Facebook, is close enough to that line that lawyers could sink their teeth in. Whether or not Facebook has the right to dictate precisely where and how users access its service, it's hard to blame any independent app developer for folding in front of a company valued at almost a trillion dollars.

Facebook does not seem to be going after all of the wrapper apps on the Play Store, at least not yet. At the time of writing similar alternatives are still available, including Faster for Facebook and Phoenix. The developer of Hermit, which offers a way to wrap up "lite" web sites into semi-separate Android applets, has said that they haven't heard anything from the company. But other alternatives, like Swift for Facebook and Tinfoil for Facebook, have disappeared. It's not immediately clear if the missing apps were specifically targeted, or why some of them still remain active.

Facebook is not the first company that's tried to bully third-party apps out of existence. Twitter has famously been locking down more and more APIs over the last ten years, cutting off popular third-party mobile apps from core parts of its functionality and limiting how many users each one can serve. But Facebook's tactics appear to be far more direct and extreme.

Simple Social and Swipe for Facebook are still functional for users who already have them on their phones or tablets, and the apps themselves can still be downloaded from APK Mirror and side-loaded on Android.