Last year, Android 11 picked up a "hidden" feature straight out of the 90s: A "trash can" for deleted files. At the time, trashed files weren't actually user-manageable. Apps could mark items for deletion (they'd bite the dust 30 days later) and offer their own ways to restore them, but it wasn't the sort of centralized "trash can" or "recycle bin" for actually deleted files we're used to from other platforms. But based on a recent report, that could change in Android 12.

For a bit of context, that change was part of Android's ongoing "Scoped Storage" tweaks, and it wasn't directly user-facing. That means developers could use it and build support for it into their apps — sort of like Google Photos or Google Drive's new 30-day deletion policy — but you couldn't just directly manage your local files with it. At least, not yet.

That last part looked set to change late last year when an in-development feature was spotted for the Files by Google app that would allow it to show Android 11's "trashed" files in a convenient folder accessible from the app's sidebar menu. That hasn't actually rolled out yet, but in tandem with it, Android 12 itself may be building in support for trash file management. 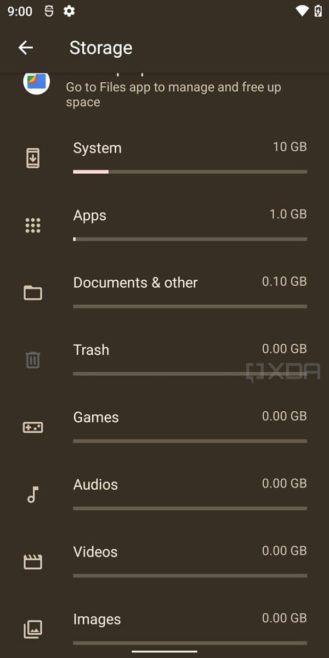 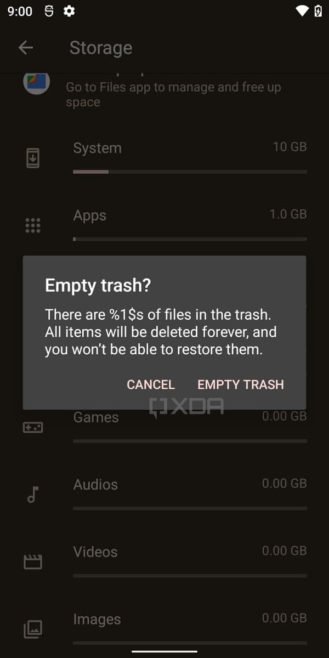 All this, of course, is subject to change, but a recent teardown from the folks at XDA Developers indicates that the Storage pane in Settings may get a new "trash" listing that states the space occupied by these trashed files, the number of trashed files, and offers to let you empty the trash and delete them. The controls are a little less granular than the feature spotted in development for the Files by Google app, but this is also built right into the system itself.

It's curious that, although the feature in Files by Google was spotted last year, and it should only depend on Android 11 to work, Google still hasn't rolled it out yet. Based on this latest development, Google may hold its appearance there until Android 12 is finished — though there's nothing really preventing Files by Google from getting it first. Either way, Android 12 is poised to catch up with the bleeding-edge file-deletion technologies of Windows 95.