Samsung's budget phones mostly look the same, and the Galaxy A11 is no exception. The device has a plastic exterior, coated with a glossy finish that easily attracts smudges and dirt. I get that the idea is to emulate the look and feel of glass, but I would have really preferred a simple matte coating. 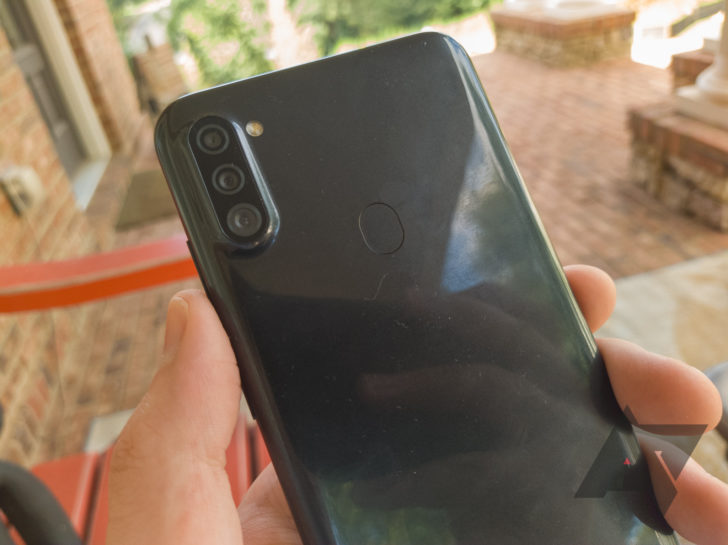 The back of the phone also has a fingerprint sensor near the top, which worked just fine in my testing. There are also three rear cameras, including a main 13MP lens, a 5MP wide-angle camera, and a 2MP depth sensor. A flash is located to the right of the camera array.

The Galaxy A11 has a 3.5mm audio jack on the top, which is (thankfully) common in phones around this price, but what isn't common is the A11's modern USB Type-C port for charging. There are still plenty of sub-$200 phones in the United States using the older microUSB connector, so Samsung gets brownie points there. 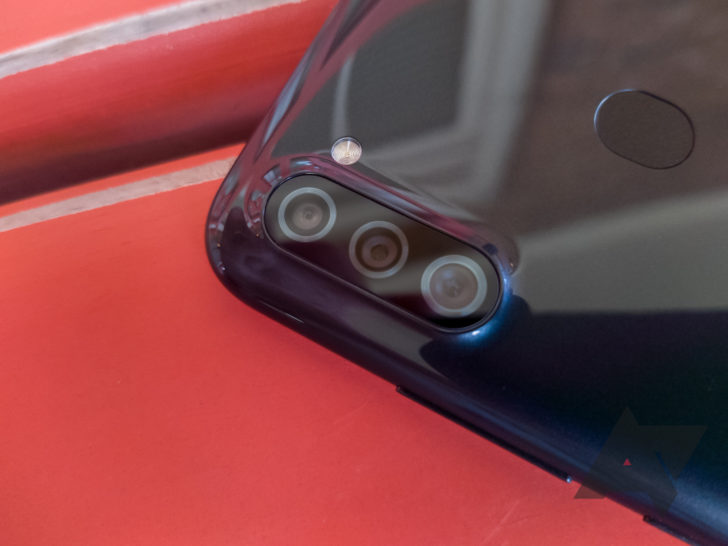 Powering the phone is a Snapdragon 450 chipset, paired with 2GB RAM and 32GB of storage. That's not a lot of memory to work with, and the Snapdragon 450 is three years old at this point. Even though the chipset is capable of operating in 64-bit mode, Android on the Galaxy A11 runs in 32-bit mode to reduce memory usage. That means no Pokémon Go. 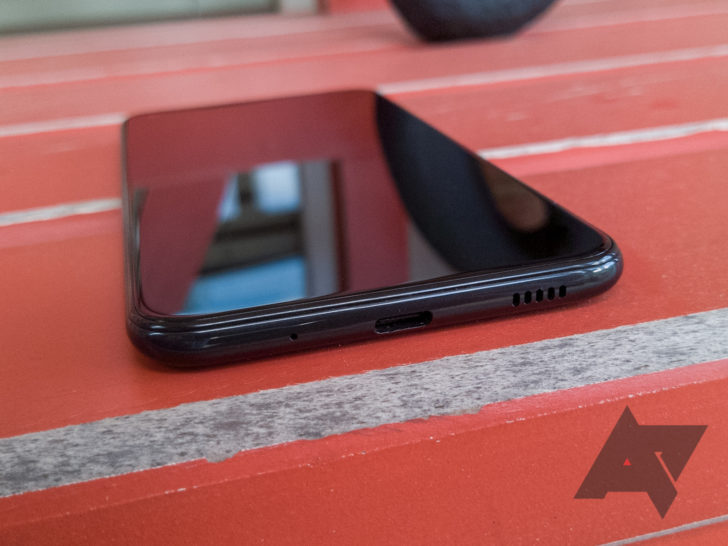 The Galaxy A11 is also missing NFC, so you can't use Google Pay, Samsung Pay, or any other contactless payment applications. It's still rare for sub-$200 phones in the United States to come with NFC support, but that doesn't make the omission any less frustrating. The Google Nexus S from 10 years ago had NFC — it should be basic functionality in every smartphone now.

The Galaxy A11 comes with Samsung's custom version of Android 10, also known as One UI 2.1. That means the software experience is fairly similar to what you get on flagship Galaxy S and Note smartphones, minus the features that require specific hardware. There are all the usual Android 10 features (full-screen navigation, improved notifications, system-wide dark theme, etc.), plus the functionality Samsung adds on top.

If you've used a Samsung phone at any point in the past few years, you'll feel right at home on the Galaxy A11. Samsung still makes duplicates of Google's applications that you can't fully remove (or even disable, in some cases), and you can't use third-party launchers with the new gesture navigation, but overall I don't have many complaints with One UI.

However, if you buy the Galaxy A11 from a carrier, prepare for a lot of bloatware. My review unit came from Boost Mobile, and over 15 third-party apps were automatically installed out of the box. Some of them, like Boost's FastNEWS app, were even sending spam push notifications.

The Galaxy A11's performance is about what you would expect for a cheap phone. Apps can take a few seconds to start up, and there are slowdowns when the phone is waking from sleep, but day-to-day use isn't outright horrible. Battery life, at least, is excellent — the large 4,000mAh battery should last most people over two days.

There are three rear cameras on the Galaxy A11: a 13MP f/1.8 main, a 5MP f/2.2 wide-angle, and a 2MP f/2.4 depth camera. You can get decent enough photos out of the primary camera, given enough lighting, though Samsung's image processing can sometimes smear details and produce unrealistic colors. However, the 5MP wide-angle lens simply doesn't have a high enough resolution to create acceptable photos. Don't use it unless you love the look of digital camera images from a decade ago. I wish Samsung would have taken the cost of the wide-angle lens and put it somewhere else (like a better chipset), but it seems to be a requirement for budget phones in 2020 to have a crappy wide-angle or macro lens.

Only if you get it at a steep discount. The Galaxy A11 has an MSRP of $179.99, which is absolutely too much money for this phone. The new Moto E is a significantly better value at $150, and it even has a faster chipset than the Galaxy A11. There's also the $130 Moto G7 Play to consider, which shares the Moto E's faster chipset, though it hasn't received Android 10 in the United States yet.

However, much like a new car, the Galaxy A11 doesn't appear to be sticking to the MSRP. Boost Mobile is already selling the phone for $130, and U.S. Cellular has it down to $99. At around $100, the Galaxy A11 is a much better value — hardly any (new) phones in that price range have a USB Type-C port or a fingerprint sensor.

Should you still get the A11?

Last year, we decided that the A11 was a good buy if you could get it at a discount. In light of the newly announced A12, should you even look at the A11?

The Galaxy A12 is a very similar phone occupying the same niche, but it makes gains in a few notable places. For one, you get a much newer ARM chip in the 12nm Helio P35. That's a MediaTek chip, but it should be able to squeak past everything in the Snadragon 400-series when it comes to raw performance. The A12 also gets an extra gig of RAM, 1,000 additional mAh of battery capacity, and a slightly larger display. The bottom bezel on the A12 has also slimmed down noticeably.

Samsung updates its flagship and pricier A-series phones for four years, but cheap phones like the A11 and A12 don't get that treatment. You can expect quarterly updates, and not for very long. The A11 is already a year old, and Samsung will probably start ignoring this budget phone before long. The A12 is new and will get timely updates for a bit longer before Samsung moves on. 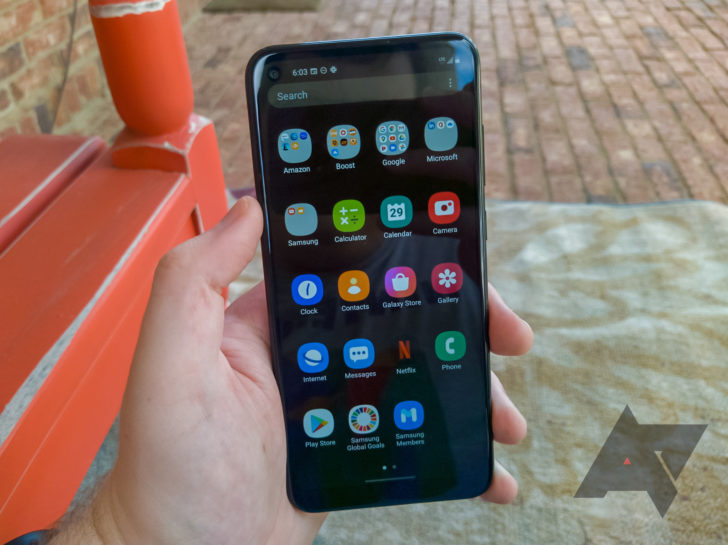 With a MSRP of $180, the A11 didn't have much room to drop. Depending on where you look, you might find it for around $100 on various prepaid carriers or all the way up to full price (Samsung). The unlocked phone is $159 on Amazon. We told you not to pay full price last year, and that's even more true now. If you can get the A11 for $99 or less from your preferred carrier, that's still an acceptable deal. If not, you should scrape together another seventy or eighty bucks for the newer phone.