Smart home gear is becoming more commonplace these days, helping to automate your daily routine in small ways. The Internet of Secure Things Alliance (or ioXt) is essential in keeping these gadgets safe, but it's just as important to ensure any backend software is also protected. Today, ioXt is expanding its certification program to include mobile apps like VPNs, with Google One among the first selected to participate.

ioXt already provides any web-connected product the option to apply for a stamp of approval, passing through all eight of the group's security principles. Based on these same guidelines, more than 20 industry stakeholders, including Google, Amazon, and mobile app security tester NowSecure, worked together to build a specific standard for mobile apps. With this new program, any developer can now earn the group's badge for their software by complying with ioXt's eight steps.

Though this process can include any cloud-connected service, including social media, messaging, and fitness apps, the focus so far seems to be on VPNs. Considering the boom in popularity VPNs have seen over the last several years, it's an important step in making sure you're protected when connected online. Google One — which includes its own VPN service — is also listed as one of the first apps certified by ioXt.  You can find the complete list of apps included at launch below: 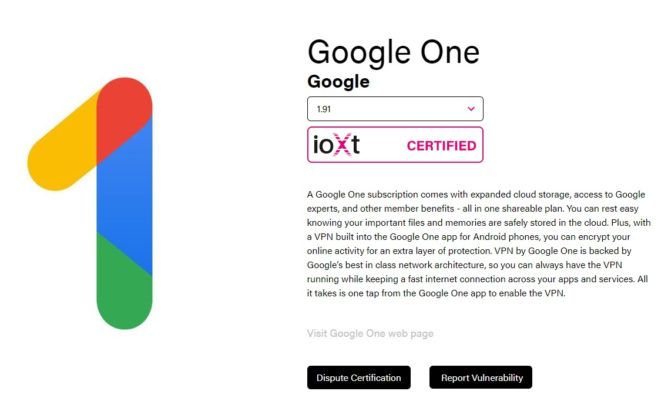 It's unclear if Google intends to add ioXt badges to app listings on the Play Store, though it would be a significant step in providing more security information to users. Last year, the Pixel 4, 4 XL, and 4a became the first three Android phones to pass through certification. This renewed partnership proves that Google is interested in pushing mobile security practices to the industry's forefront.