Buying a new television is cheaper than ever these days. Constant sales make it easy to pick up a set with an excellent display for not a whole lot of money, and most TV makers now include half-decent software to get your favorite shows and movies up and streaming. Sony is one of the few manufacturers to include Android TV as its OS of choice, which bundles dedicated apps from the Play Store alongside casting with your smartphone. If you're looking to buy a massive screen for your living room, Sony's 85" X950H is back to its lowest price at Amazon.

Make no mistake — even on sale, this is far from a budget set. The X950H is Sony's best TV outside of its OLED sets. It's also one of the best you can buy, a display that's perfect for everything from movie marathons to hiding behind the couch while playing Resident Evil VIII next month. Android TV with Google Assistant makes for a great way to watch all the subscription services you keep forgetting to cancel, but if you'd rather plug in your own streaming device, you'll find four HDMI ports to support every gadget lying around your house. 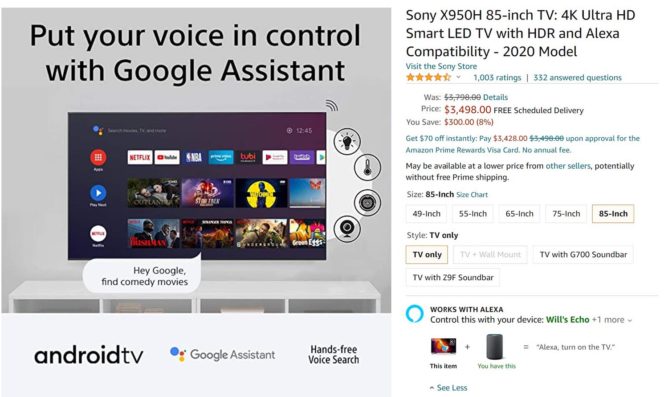 If you want to convert your living room into a home theater without switching to a projector, it's hard to beat Sony's X950H. At $3,500, this isn't a budget set, but you're still saving $300 off its usual price for the first time since the holidays. If you're looking for a massive display without losing out on picture quality, this is the set for you. Grab it from Amazon using the link below.

Venmo heard you like stories, so it added stories to its app to give you more stories