Summer 2021 is so close you can almost feel it, and with vaccines already starting to reach the general populace, people everywhere are eager to make up for lost time. If your plans involve spending some time with friends and family in the great outdoors, whether that means a day at the beach or a weekend in the woods, keeping everyone's devices powered can be tricky — and that's where Jackery steps in. The company already offered a wide array of portable power solutions ranging from the easily totable to the heavy-duty, and this year it's upping its game with the highest-capacity, highest-output model yet: the Explorer 1500.

When you're looking at the latest Jackery Explorer Portable Power Station, you're not going to get a lot of surprises, because this is a basic layout we're now well familiar with: a durable plastic exterior, integrated carrying handle up top, and all of our buttons, ports, and display on the unit's face. The sole exception to this is a side-mounted LED (just as we saw on the Explorer 1000) for a little bit of extra light or to set flashing to signal SOS. 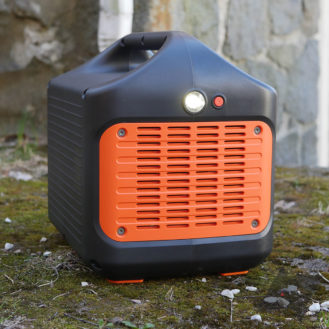 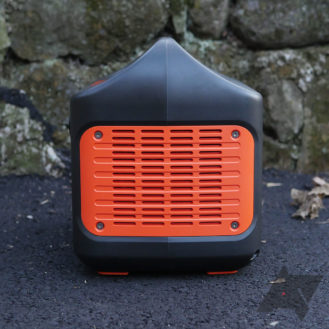 On the left, our SOS LED returns; the right side, meanwhile, is just vents.

But just because we're dealing with a familiar design doesn't mean we don't have any changes to look forward to, and the most prominent one here is an all-new design for the Explorer's display. It's gone dark-mode this time around, with a new black background that I think really helps with visibility. There's also a lot more info packed onto the screen, expanding beyond basic power in/out to also give you feedback about power quality (voltage/Hz) type of input (line/solar) and even temperature warnings.

The only real failure here is that Jackery isn't taking full advantage of the new display. For instance, there's a graduated ring circling the main battery-capacity readout. One would quite reasonably assume that this would be used as a gauge — with segments of the ring turning dark as battery charge was consumed. But nope. All that happens is that the ring spins while you're charging; that's it. What a waste. 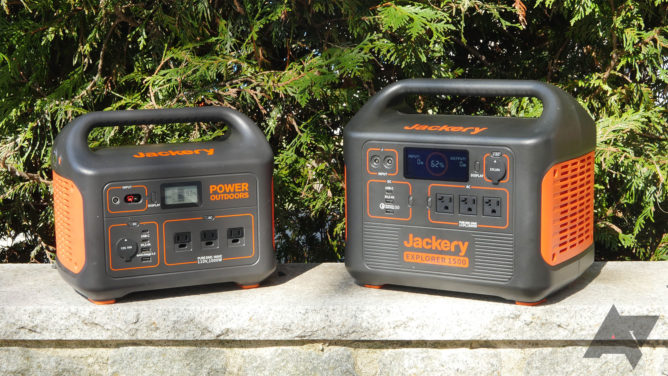 Just like past models, the Jackery 1500 comes with a number of input accessories for keeping it charged, all provided in a convenient carry pouch. Like usual, that means an AC wall adapter (this time rated at a hefty 300W) as well as a 12V cable for car charging (and sadly, no option for charging over USB-C). What's new this time is the inclusion of an adapter to support existing Jackery Solar Saga panels, since the company's moved to a new size barrel connector. I never love having one more little piece to lose, but it's not the end of the world. 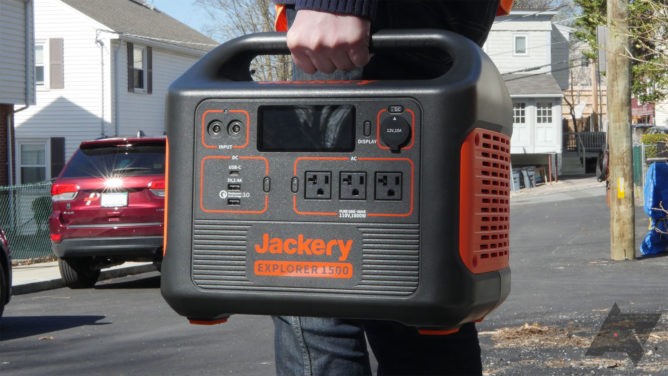 The Explorer 1500's 33lb weight means you want to get it to your destination and set it down ... fast.

Higher capacity means a physically bigger battery — there's little getting around that. And while this box is only an inch or so larger in most dimensions than the 1000, it's a solid 50% heavier, coming in at just over 33lbs. Granted, I am very much a weakling, but that's a little more than I like to carry around.

OK, let's get to the meat of this thing — what can it actually do, and how does it improve off of earlier models? Well, capacity and maximum output get a big boost, and we're looking at a hair under 1,500Wh total storage, thanks to a big array of individual 18650 li-ion cells. It's the output, though, that really shines, eclipsing the 1,000W power ceiling we had before with 1,800W baseline, and support for 3,600W peak output. That's just crazy, and opens up compatibility for a lot of the more demanding appliances that the Explorer 1000 just couldn't reliably handle — now, even a 1,200W microwave doesn't make the battery flinch. This puppy can even handle a large toaster oven. 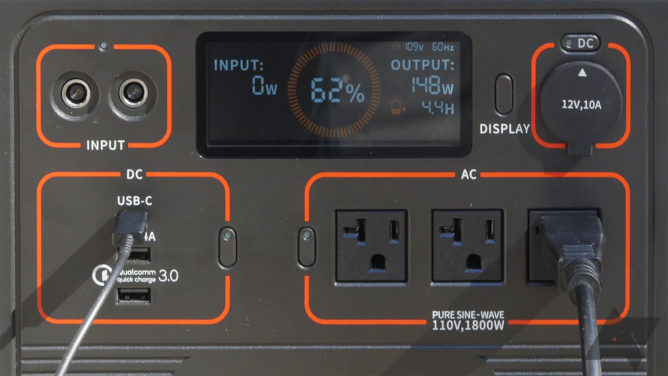 That may not be the primary usage you had in mind, but that's what great about the flexibility you get here: sure, you bake up a nice croque monsieur, but you could just as easily recharge your phones, laptop, Switch, and whatever else you're lugging around a preposterous number of times.

It's not just the AC output that gets an upgrade, and we also have another of the 60W USB-C PD ports that first debuted with the Explorer 300. That works just as well here, though I have the same complaint that I would love for this to be a power-in port, as well, for charging without a bulky power brick. 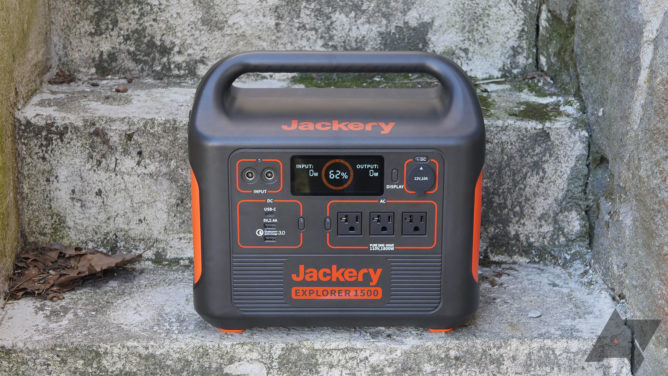 With all that extra room on the battery's face, it's a little frustrating that Jackery is cutting down on USB ports, rather than giving us more.

What's a little upsetting, though, is that there's only this one USB-C port. There are another two standard-A, granted, but the Explorer 1000 gave us two of each — it doesn't seem fair for the physically larger 1500 to be cutting back, when instead there's room for plenty more. Hell, give us half a dozen — this beast could handle them.

Another change this year concerns input: Jackery gives us not one, but two input jacks. This opens the door for some positively ridiculous (and awesome) charging options. Not satisfied with the 300W AC adapter that comes with the unit? Pick up a second one, and you can use both at once — this will accept the full 600W. That puts the fastest of phone fast-chargers to shame, and at full input, can charge the battery to 80% in just 2 hours. 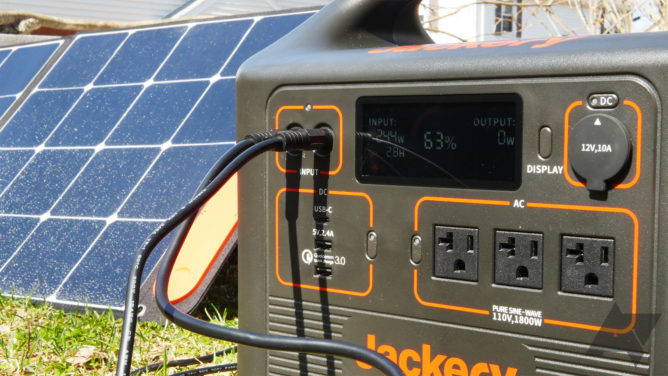 Four panels producing 244W of pure solar input — and that's not even the most this can do.

You can also double — nay, quadruple up with solar panels. Jackery already has adapters that combine the output from two panels together. With a pair of those, and these two input jacks, you can run four Solar Saga 100W panels at once (with MPPT support). The winter sun as of late hasn't been too kind, but last summer I was easily pulling 80-85W per panel in bright sunlight. That means that with four wired up, and the weather cooperating, you can conceivably charge the Jackery 1500 from the sun even faster than you can from a wall outlet. Granted, these accessories get expensive fast ($300 a pop for the 100W panels, though you can save a bit by picking up a set of four alongside the 1500 all at once), but are a fantastic add-on when you won't be near wired power sources for a while.

Another nice new addition is the inclusion of time estimates. Not only does that tell you how much longer the battery's power will last based on current usage, but it also works for input and displays how much time you'll need to complete a full charge. Especially with solar, that's really handy, as you never know just how cooperative the sky's going to be. 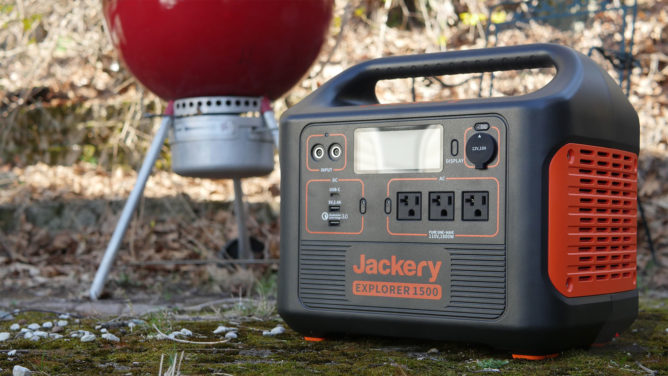 Jackery Explorer 1500
8/10
Maybe. The Explorer 1500 is an upgrade in nearly all ways over the Explorer 1000, offering improved capacity, power output, operational feedback, and charging options. Really, the only solid complaint I have regarding changes to the feature set is the removal of a single USB port.

Instead this is more a question of "do you need it" and balancing the downsides that come with a higher-capacity unit: weight and price. The Explorer 1000 was already about as heavy a battery as I wanted to carry, and the 1500 is just not fun to lug around. If you're only going a few feet from car to campsite, maybe that's not a big deal, but if you don't actually need this kind of capacity, I'd definitely steer you towards a smaller unit.

That goes for price as well, and if you don't have 1800W appliances you're trying to power, or need the full 1488Wh capacity here before you're able to recharge, you might want to think twice about whether you should choose this model in particular.

Jackery's set to once again have the Explorer 1500 in stock on April 12, with the battery priced at just about $1600. The company's got an early-bird discount code good on both its own site and Amazon that will knock 10% off that: JACKERYE1500. And while that's a nice intro deal, the Explorer 1000 is also enjoying a price cut, now down to $900. While I absolutely love all the upgrades here, I'm just not sure they're worth a $540 premium for most users, especially if you don't need that extra capacity. If your needs do align, though, the Explorer 1500 is just what you've been waiting for.

Wireless earbuds are disgusting, but this adorable washing machine can fix that