The advantages of using F-Droid are primarily twofold: the entire app catalog is completely non-commercial (so no forced purchases, though you're welcome to donate to the developer), and, very importantly, F-Droid is friendly to custom Android ROMs that lack Google Play services, either optionally (e.g. LineageOS) or by design, as seen in security-minded ROMs like GrapheneOS. There is a small learning curve, however, as F-Droid is designed to be the Android app store for power users and security conscious types alike, rather than catering to novices. 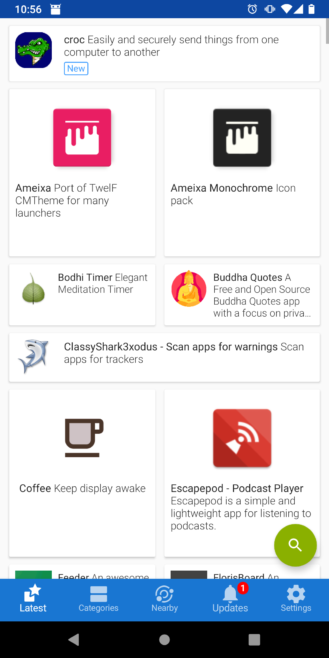 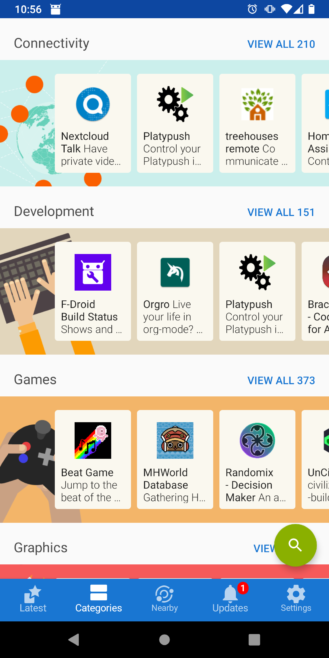 The latest (left) and categories (right) sections display available apps for download at a glance.

Much like the Play Store, F-Droid automatically updates apps downloaded through its catalog (on rooted devices), as well as gives the user the ability to choose to download updates only via Wi-Fi to avoid using too much data on metered plans. The interface is reminiscent of your typical app store, defaulting to a "What's New" screen. Essentially, it works like the Play Store, except everything is free. F-Droid provides a toggle switch in the settings to even allow apps that require what are called "anti-features," which typically encompass aspects of Android that are not privacy-conscious, like unwanted location tracking and supercookies. Thankfully, F-Droid leaves this behavior off by default.

To install F-Droid on your device, point your browser to f-droid.org, then select the "Download F-Droid" link from the home page. Alternatively, you can scan the QR code from the home page to grab the APK directly. Once installed, F-Droid performs a bit of initial housekeeping and then initiates a fresh pull on the repositories in order to populate the apps listing. Much like the behavior of modern Linux distributions, F-Droid can also accept additional third-party repositories if the user requires it. This feature is especially important, since some projects or packages (like the web browser Bromite) don't make their way to the standard F-Droid repository, usually since there are developers that prefer to control their own distribution backend more directly. In the F-Droid settings panel, select "Repositories" under My Apps.

It's worth noting that all connections made over the network by F-Droid are handled using HTTPS, for enhanced security. Tor is also available for additional privacy, so long as the Orbot app is installed on the device. Orbot is available via the Guardian Project F-Droid repository. 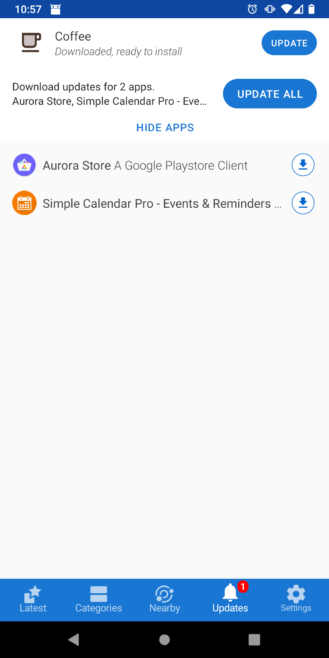 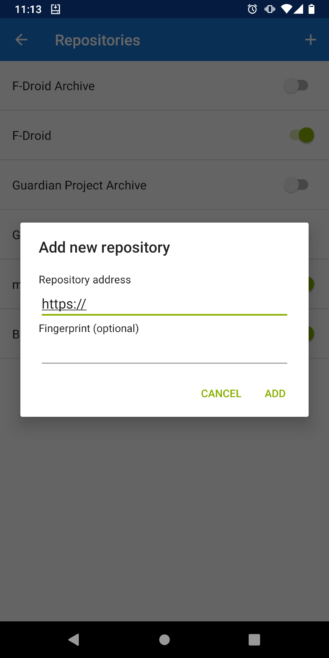 F-Droid offers an interesting party trick, that only recently was included as a similar feature to the Play Store: If no internet connection exists, but another F-Droid user is found on the same network with particular packages of interest already downloaded to their device, a "Nearby" menu item helps facilitate the peer-to-peer exchange of F-Droid-specific APKs. Both Wi-Fi and Bluetooth connections are available, to offer additional flexibility in transmission. 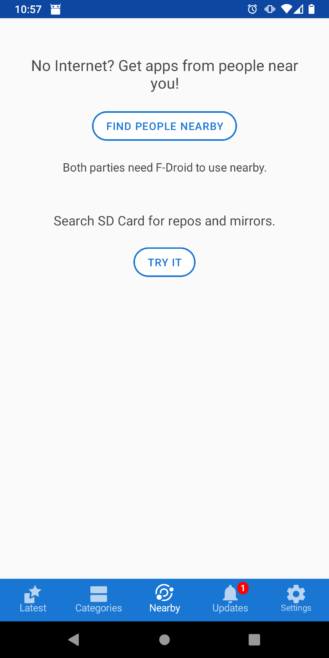 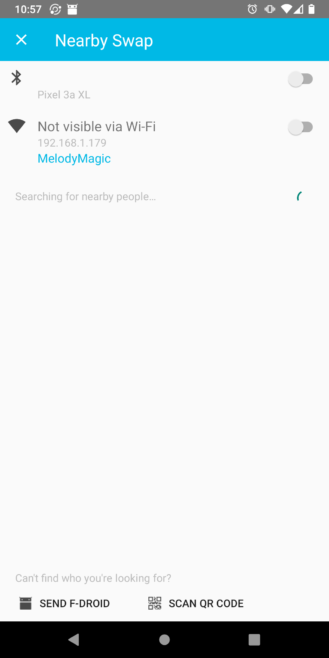 No Internet connection? No problem. F-Droid can support peer to peer apk installations.

Overall, F-Droid is a worthwhile companion for the privacy-conscious Android user who wishes to limit Google's presence on their device wherever possible, yet provide a clean and salient alternative to direct APK sideloading. It's slick, doesn't require a user account, and is quite customizable, to boot. To get started, just visit the F-Droid website, or grab the latest release from APK Mirror.

The best ways to sign, edit, and annotate PDF files on Chromebooks