If there's a speedrun record for releasing tech products, Wyze might be on track to break it. In November alone, the company announced new sprinklers, vacuums, thermostats, third-gen Wyze Cams, and smartwatches. Wyze isn't stopping there, as it has come through on the launch of its home monitoring service.

Wyze Home Monitoring, originally announced in December, is comprised of several pieces of hardware, including the Sense Hub (which acts as a network bridge for the other devices), Sense Keypad, Sense v2 Entry Sensors, and Sense v2 Motion Sensors. The new motion sensors are much larger than the original versions from 2019, which Wyze says is due to "drastic improvements in performance and battery life." It's not clear if the original sensors will work with the updated home monitoring package. The Sense Hub also has a built-in battery backup, so it can continue recording data in the event of a power outage.

The monitoring plan will cost $60 per year (or $5/month) and is powered by security provider Noonlight, the same company that responds when you tap the emergency button on the Wyze Cam. When an intruder or other emergency is detected by an armed sensor, you're connected to a dispatcher that can route data to local 911 call centers and first responders as needed. 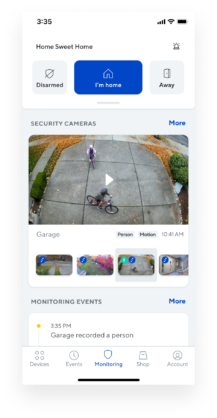 Even though the Home Monitoring package doesn't include a camera, the system will integrate with Wyze Cams, and home monitoring alerts will be synced with Wyze Cam footage (similar to regular Cam motion events). The app will have an easy toggle for arming or disarming your home, and will also provide daily summaries.

The hardware package is available for pre-order today on Wyze's website, with an estimated shipping date of March 2021.

The service promises text communication with a Noonlight agent within 5 seconds of a trigger — importantly and new for this update, this not just includes activity detection on Wyze cameras, but also on its sensors — and, if you don't respond within 30 seconds, a phone call. Local first responders are dispatched if you confirm you need help or are unable to respond.

You can learn more about and purchase Wyze Home Monitoring here.