Samsung announced the Galaxy SmartTag back in January, alongside its Galaxy S21 series of phones. A direct competitor to Tile, SmartTags are designed to help you keep track of keys, wallets, and anything else that has a habit of disappearing on its own. Although the standard SmartTags have been on sale for a little over two months now, the enhanced Tag+ model lagged behind a bit. Samsung has now announced retail availability: April 16th.

For the most part, the SmartTag+ is the same gadget as the original version released in January, with one notable change. This model includes ultra-wideband support, which improves accuracy when measuring distances between devices compared to Bluetooth LE on its own. That extra bit of capability also lets the SmartTag+ (labelled as SmartTag Plus in some locations) indicate its location visually, which allows the SmartThings phone app to "spot" it with augmented reality.

Unlike Tile tags, these trackers only work with Samsung phones running Android 8 or newer. If you're rocking a Pixel 5 or any other Android smartphone, you'll need to find another way to keep track of your lost gear. 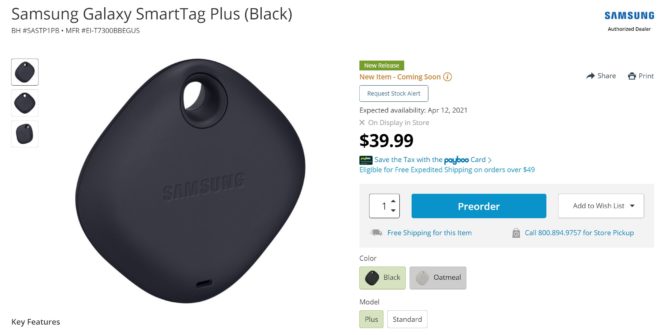 Samsung has priced the UWB version at $39.99, while the basic Bluetooth model is still up for purchase at just $29.99. Earlier this month B&H Photo had the black and denim blue SmartTag+ models up for pre-order, but those pages have since gone blank. Presumably they'll be reactivated next week when they reach more official retail availability.

This story has been updated with Samsung's official pre-order date. The original B&H pre-order page seems to have been posted too early, and has since been removed.