Android 12 DP2 just picked up its second bug-fixing update, bumping things numerically to DP2.2. This latest release includes a lot more fixes than DP2.1 did, including a fix for video encoding issues that I ran into, a crash tied to the Bluetooth section of Settings, disappearing widgets, and a failure to save Wi-Fi passwords, among others. 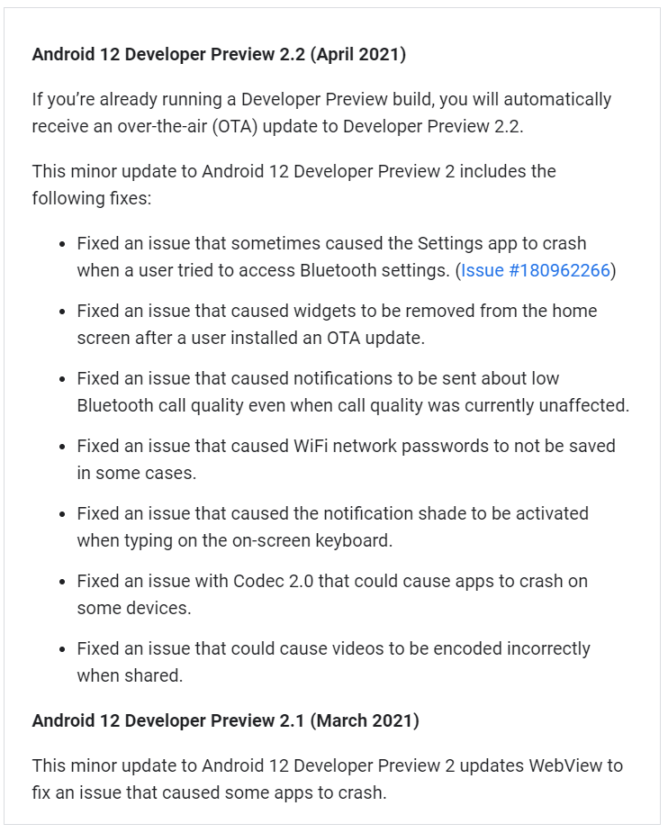 Screenshot of the release notes for Android 12 DP2.2

This release also joins other Pixels in picking up the April patches, but it also fixes at least seven named issues:

Some claim that a problem with gesture navigation, which was supposed to be fixed in a prior release, persists into DP2.1, but if another fix for that issue is included in this release, it wasn't mentioned. It's also possible some unnamed changes snuck into this release — that sometimes happens, we'll keep an eye out.

I have long speculated an X-Files level conspiracy to my Android Police co-workers: That this new 0.1 formatting implies the possibility we'd see multiple updates between releases, compared to last year's 0.5 version numbers. As of today, that has happened for the first time, and I feel vindicated. The truth is out there, guys.

The update is already rolling out via the traditional means for those that have installed a prior Android 12 Developer Preview. Compatible phones remain the same: The Pixel 3 series, 3a series, 4 series, 4a series, and Pixel 5. OTA images are also available for manual sideloading/deconstruction if you prefer to install it yourself.

If you're doing it for the first time, we still recommend you wait until the Android Beta Program starts, but we have instructions here if you're willing to assume the risks.

A previous version of this post said DP2.2 was running March patches, and that was incorrect, we can verify that it is running April 2021 security patches.