Back in the day, switching to a new phone meant you'd lose most of your local data. Over time, it became easier to transfer your files, settings, and contacts, provided you'd stay on the same ecosystem. For instance, if you get a new Android phone, your WhatsApp conversations and media would automatically be restored thanks to an online Google Drive backup. However, in case you decide to get an iPhone, there is no official way to restore your conversations and media from your Android phone. WhatsApp is reportedly working on fixing this caveat, thanks to a native solution to automatically transfer your chat history across platforms.

It's not secret WhatsApp is working on allowing users to chat from various devices using the same number. Although it's not entirely clear how this feature will be rolled out, it does make sense for WhatsApp to allow cross-platform backup as well. Indeed, whether you use various devices simultaneously or simply switch from one to another, the structure to access and sync your conversations across devices should be harmonized. 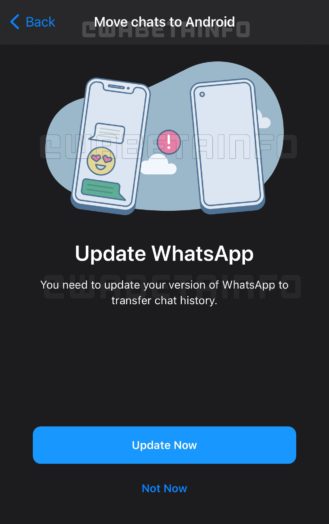 The feature is not available yet, but new leaks indicate users will be allowed to migrate their chat history from iOS to Android and vice versa. According to the screenshot above, it looks like the process won't be automated and could have to be manually triggered to launch the transfer.

It's essential to keep in mind the feature is not yet implemented, so it could work differently when it officially comes out.