We just gave the Samsung Galaxy S21 our "Most Wanted" award, but OnePlus started selling a worthy competitor this week: The OnePlus 9. Both phones are pretty similar in size, hardware, and price, with their own advantages and disadvantages, so deciding between the two might be a bit difficult. But we're here to help and will guide you through the nuances and differences in this post.

On the surface, the two phones couldn't be more similar. Both have the latest high-end Qualcomm processor, the Snapdragon 888, and they start with 8GB of RAM and 128GB of storage. The displays are both OLEDs and have a refresh rate of 120Hz, though the S21's screen is only 6.2 inches while the OnePlus' is 6.55. While both support Wi-Fi 6, Samsung saved some money on Bluetooth by going for version 5.0 over 5.2. That's a bummer because of some low-power audio streaming improvements for earbuds. Neither phone has a headphone jack nor expandable storage, sadly, and both are single-SIM phones in the US. 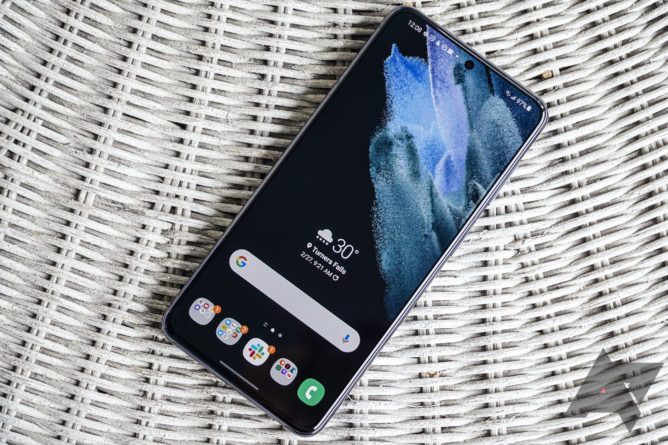 Things diverge a bit in the battery and charging department. The OnePlus 9's 4,500mAh battery charges at up to 65W with the included brick, allowing for a full charge within less than an hour. The S21 has to make do with a 4,000mAh power supply that charges at 25W max. If you charge overnight anyway, this shouldn't bother you too much, but extreme fast charging is always great to have in case you need to top up shortly before heading out — and in contrast to Samsung, OnePlus provides a charging brick in the box.

Unlike Samsung, OnePlus has an excellent alert slider above its power button, which allows you to switch between silent, vibrate, and ring without even having to unlock your phone. You also get to choose between an extremely-well made matte plastic back with a metal frame on the S21 and a glass back with a metal-imitating plastic frame on the OnePlus 9.

OnePlus phones have historically been rather mediocre in the camera department, but thanks to the company's new cooperation with Hasselblad, the tides are turning a bit. In our review, we noted that OnePlus' image processing still isn't entirely to our liking with over-sharpened edges and aggressive smoothing over details, and the camera also suffers from blurriness and questionable white balance in low light. Things have gotten a lot better, though, and the new OnePlus flagship lineup is almost on par with Samsung's image processing. The inclusion of an ultra-wide "freeform lens" is great for macro shots, though we're baffled at the decision to add a mostly useless 2MP monochrome sensor. 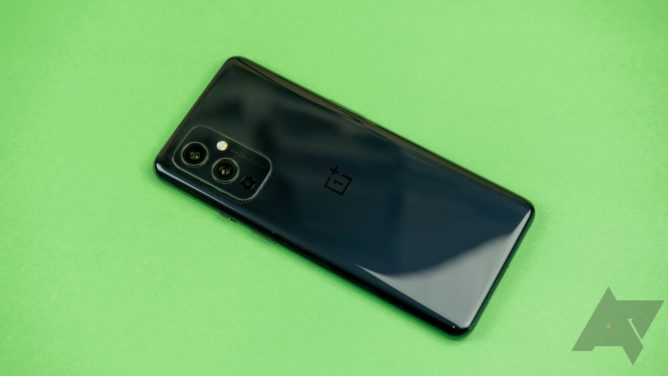 Meanwhile, our biggest gripe with the Galaxy S21 camera is Samsung's tendency to over-saturate colors and texture-destroying muddiness in low-light situations, but overall, the camera is still more reliable and versatile than the OnePlus 9's thanks to a better selection of lenses (wide, ultra-wide, tele). You can read more about it in our full Galaxy S21 review.

Both phones come with Android 11 at launch, and both have their own software issues to grapple with. While Samsung's software has gotten incredibly good over the years, the company has a few annoying default settings that you might want to change as soon as you get the device. Samsung also has a bad habit of pushing ads into your notifications, which are hard to disable. Once you've got everything set up the way you want it, things should run smoothly, though, and you'll find almost anything you could ask for and more. The manufacturer has also gotten incredibly good at software updates over the years and promises up to three years of software updates and four years of security fixes — currently the only (mainstream) Android manufacturer to do so.

Things are a bit different for OnePlus. We used to laud the company for its great, almost Pixel-like experience with relatively fast updates, but over the years, OnePlus has been falling behind release schedules and the software has gotten buggy, with Android Auto and system navigation crashes on our review unit. For the most part, the experience is smooth, though, and there are some thoughtful additions to Android like scrolling screenshots, screen off gestures, Parallel Apps (for running two instances of the same app with different accounts next to each other), and more.

If you rely on background apps a lot, both phones won't necessarily make you happy out of the box — Samsung and OnePlus are incredibly aggressive when it comes to killing background activities. You'll have to work around the restrictions by exempting apps in the system settings of either phone, and even then, some apps will still have issues.

Even though the Galaxy S21 is a tad more expensive than the OnePlus 9 ($800 vs $730), the Samsung phone will be able to serve you well over a longer period of time thanks to its extensive software update policy, if you plan to keep it for years to come. And despite OnePlus' Hasselblad cooperation, Samsung's camera game is still spot-on and often superior to OnePlus'. All in all, that makes the Galaxy S21 the better choice for most people, though the OnePlus 9 might still lure you with its smaller up-front price, the excellent 65W fast charging brick in the box and some unique features like the alert slider and the ad-free interface. You won't really go wrong with either phone, so make sure you pick the one that suits your preferences better. 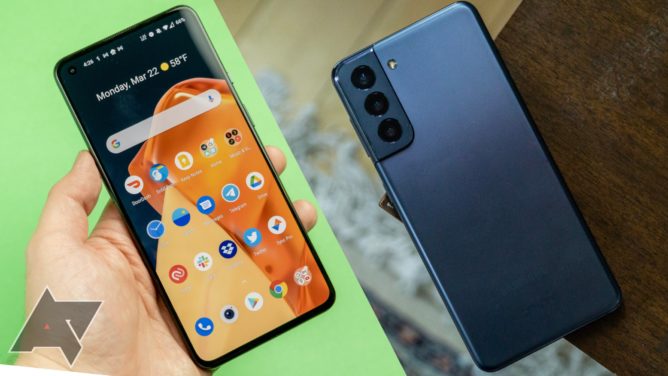 The article previously stated that the OnePlus 9 had Bluetooth 5.0 and the Samsung Galaxy S21 had Bluetooth 5.2, while it's actually the other way around. We've updated the post accordingly and apologize for the error.

12 new and notable Android apps from the last two weeks including Glug, Stack, and Balance ...

These smart LED strips and light bars will up your home theater game — and they're 20% off ...