Let's address the most obvious point here: this is one hell of a big watch. Weighing in at 103 grams and 19.5mm thick, the GSW-H1000 is far chunkier and heavier than any of the brand's previous WearOS devices. The angular, rubberized body and prominent "G-Shock" logo make it look like any of Casio's other rugged timepieces. It's built like one, too, offering the same shock resistance and 200 meters of water resistance as most of its analog watches. The usual array of sensors found in most modern wearables is here: an optical heart rate tracker, compass, air pressure meter, accelerometer, gyrometer, and built-in GPS. Unfortunately, there's no word of which chipset is powering this behemoth  — a bad sign for any performance expectations. 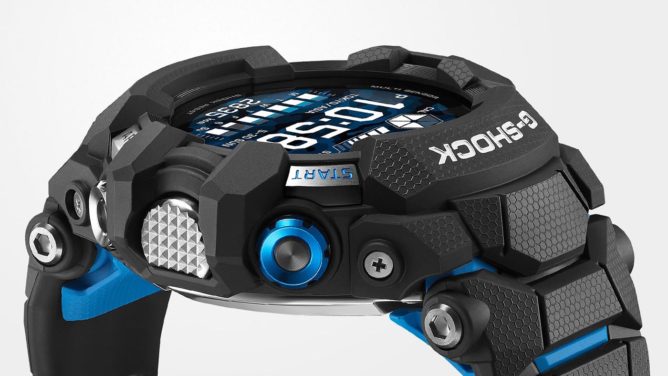 As for its screen, a 1.2" dual-layer display aims to improve battery life, with a full-color LCD underneath an always-on monochrome LCD used to show the time. The GSW-H1000 should last about a day and a half on a single charge under "normal" use, but it can be extended to as long as a month by limiting the display to grayscale mode.

Casio is placing a strong emphasis on its included fitness software, with tracking support included for 15 activities and 24 indoor workouts. In addition to essential workouts like running or cycling, the app can track your sets and reps for weightlifting and supports multiple water-based activities like swimming, kayaking, and surfing. These exercises sync with the G-Shock Move app on Android, displaying activity history, training analysis, and more.

If you've ever considered buying one of Casio's G-Shock watches, you know they don't come cheap. The GSW-H1000 is no exception, priced at $699 in the US and £599 in the UK. Availability has yet to be announced, but if you're interested, keep an eye on its store page for when preorders go live.