Yesterday Google highlighted several great new features coming to Maps, but the company left one little detail out of its announcement: The compass is back. The classic orienteering widget is back by popular demand, and it's about as reliable as ever.

The compass was a fairly obvious feature for a mapping application, but due to reliability issues, its usefulness was also fairly questionable. The Maps team experimented with removing the compass in January 2019 for some users before taking it out entirely about two months later. It's not hard to find threads with people expressing displeasure or asking for advice to get it back. 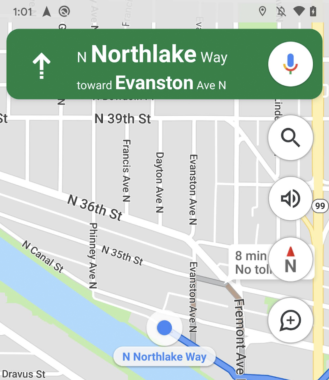 It may have taken two years and an unknowable number of feedback reports, but according to a community manager on the Google Maps Help forums, overwhelming support from users is responsible for bringing back the compass.

The post indicates that this will work with Maps version 10.62 and above, but it seems to be working in some slightly older versions, as well. However, it also disappeared for a short while during testing.

Regardless of the re-launch details, at least two of my phones still don't point in the right direction, even after calibration. It can be an incredibly useful tool, but just remember to be wary of its accuracy.

Your Chromebook has a bug that can reveal your location, here's how to fix it