Google released the original Nest Hub (née Home Hub) in 2018, and we liked it even at $150. That price came down substantially, giving more people a chance to try out what was arguably the best Assistant smart display. Google says one in five people put that device in their bedrooms, thanks largely to the lack of a camera. The second-gen Hub still doesn't have a camera, but it does watch you. Hiding inside the almost identical chassis is a Soli radar module, which monitors your movement and breathing to track sleep. Any technology product that watches you sleep is bound to come off a little creepy, but there's more to the Hub than sleep tracking.

Google's second-gen Nest Hub is a slightly better version of the original at a lower MSRP of $99. It's still an excellent smart display with all those Google integrations, and I appreciate the performance bump. The sleep tracking works—it can reliably determine when I get in bed, when I fall asleep, and when I get up, Although, it can't tell the difference between me (a human) and a dog. Google says Sleep Sensing will offer tips to improve your sleep, but my suggestions haven't gone beyond common sense. It's overall a similar experience to what I've seen on various wearables, just a bit more convenient. I'm not uninterested in more convenient sleep tracking, but Google's got some work to do if it wants to charge money for this service.

I assure you all the photos in this review depict the new Nest Hub, but I could be lying, and you'd never know. The new Hub looks identical to the first-gen, from the fabric-covered base to the 7-inch LCD panel. If you look at the two devices side-by-side, the only discernable difference is the lighter sensor window on the new Hub, which blends a bit better with the bezel. The bezels are still substantial, but that's not a huge problem for a device you don't have to carry around. I'm a little more annoyed that the bezel is still pure white regardless of the color you choose: chalk, charcoal, mist, and sand. There's no battery, and it uses the same barrel connector as the old Hub (that's also the only thing you get in the box with the Nest Hub). 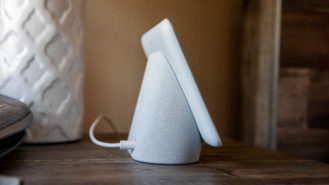 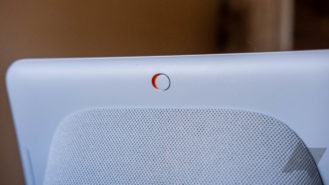 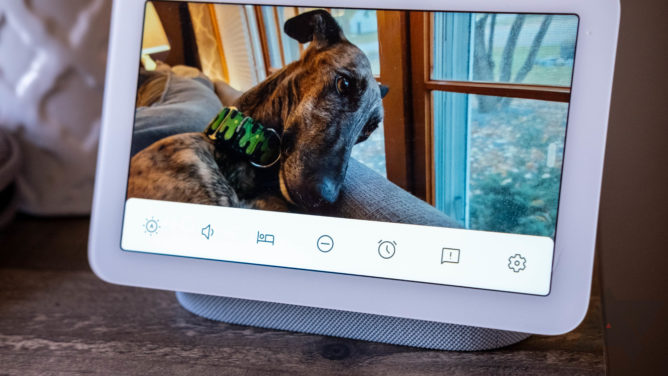 The Nest Hub's 7-inch display is just 1024x600 resolution, which is far lower than a modern smartphone. However, you usually use the Nest Hub at arm's length, and the low pixel density isn't very noticeable. It's actually a great display for this device because it has extremely low minimum brightness. I'm sensitive to anything bright while trying to sleep, but the Hub gets so dim that it hasn't bothered me at all (when set to the lowest nighttime brightness). It's just barely visible in a dark room if your eyes haven't adjusted.

The Nest Hub also has Ambient EQ, Google's color calibration tech that matches the display to ambient light. That keeps the Hub from blasting you with distracting blue light in the evening, which is even more important for a display in your bedroom than one in your living room or kitchen.

One small frustration is that the Hub's temperature sensor only works with Sleep Sensing. So, you'll see the average temperature on your morning report, and presumably, that could tell Google something about how you slept. I wish this sensor did more. For example, why can't it act as a remote temperature sensor for Nest Thermostats?

The screen floats in front of the angled base, inside which is the speaker. Audio isn't the focus of this device, and the quality is predictably flat and middle-of-the-road. It's a little more bassy than the first-gen Hub—I'd put it on par with the Nest Mini speaker. You can crank the volume surprisingly loud; handy if you're a heavy sleeper. It's fine for dealing with Assistant, alarms, playing white noise, and listening to the occasional tune. 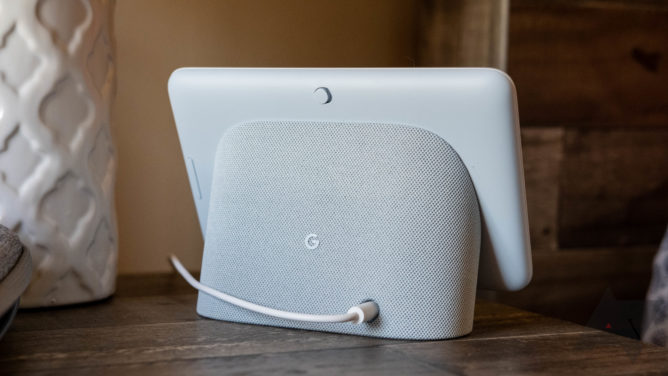 Our "Mist" unit looks blue from the back but white from the front.

Around the back of the display, you've got the same mute switch from the last iteration. Flip that, and your device's microphones will turn off. Speaking of microphones, there are three of them instead of two like on the first-gen Hub. I have felt like the new Hub hears me better, but that could simply be thanks to the faster processor and enhanced ML hardware. Google doesn't provide detailed hardware specs, but it's got a 1.9GHz quad-core SoC compared to a 1.5GHz quad-core in the old version.

If you've used a Google Nest Hub or even one of the third-party Assistant displays, the experience with the 2nd-gen Hub will be familiar. It has a photo frame mode that connects to Google Photos, making the Hub one of the best ways to enjoy your snapshots. Ambient EQ gives the screen a subdued and natural appearance, which is perfect for photo viewing. If you're not a big shutterbug, you can also set the photo frame to display curated art or a full-screen clock. 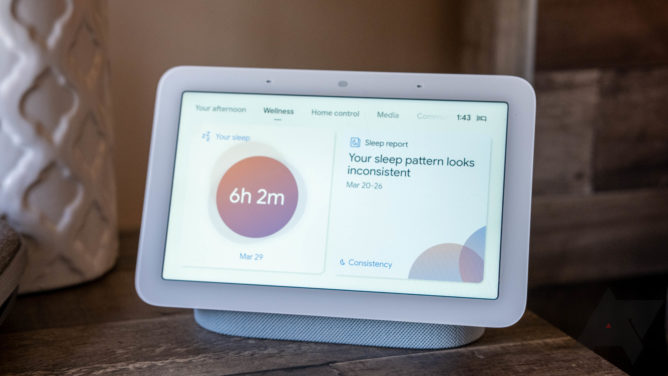 To access the rest of the display's interface, you can tap anywhere on the photo frame. This is one of the places you can really feel the improved performance of the new Hub. There are times with the old Nest Hub that I end up tapping a second or third time because it's impossible to know if the device is just lagging terribly or didn't register the tap. The new Hub wakes up reliably, and swiping through the various screens is quicker. I don't find myself waiting multiple seconds for taps to register, but the device is still prone to occasional stutters and lag.

The only new software experiences are centered around Sleep Sensing, which the display asks you to set up when you start using it. The process is simple (save for the annoying and unskippable intro video): put the display near your bed, lie down, and let Google start scanning. You have to tap through a lot of info screens before you get to that, some of which ask you to be really, super sure before continuing. The number of these screens might creep out some people, but I'm satisfied with the privacy of my data for a few reasons. For one, the Soli sensor can't really "see" anything. It's just analyzing a spectrograph with machine learning to identify a roughly human-sized lump. Google says radar data never leaves the Hub, as well. I found it to be very accurate at tracking when I get in bed, fall asleep, wake up, and get out of bed. It even knows when I'm coughing or snoring, which is neat but not useful data for me personally.

My experience with Sleep Sensing also demonstrates the "approximate" nature of Soli on this device. My wife's presence on the other side of the bed didn't interfere with Sleep Sensing because the radar bubble only extends a few feet from the Hub. However, the Hub cannot tell the difference between me, a human male of average height and build, and Egon, a 55-pound Spanish Greyhound who likes to hop up on the bed when I'm not in it. Google says breathing is the key here. A pile of laundry won't register as a person, but the dog does. On some level, I find this comforting—Sleep Sensing isn't precise enough to know what's going on in the room beyond "breathing thing: yes/no." On the other hand, it's very easy for Egon to ruin my sleep data. There's no way to disentangle it, either. All I can do is delete the days when he takes a nap on the bed. Or I guess I could close the bedroom door, but I'm not a monster.

Sleep Sensing is designed to make suggestions to help you improve your sleep. I've only seen a few of these, shaped no doubt by Egon's occasional presence in my spot. Google says my sleep schedule is inconsistent, and I should stick to my stated bedtime. That's fine advice, but it's not what I'd call insightful—I don't need a radar bubble in my bedroom to tell me inconsistent sleep schedules are bad. Although, I've only been using Sleep Sensing for about a week. Perhaps over time, it will get smarter. And it better if Google's looking to charge money for this feature next year. 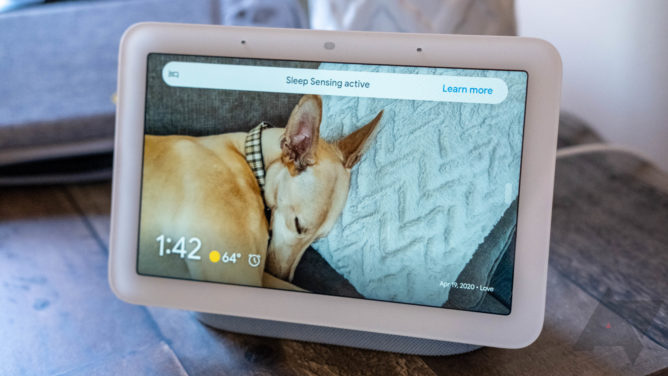 The Soli sensor also works with Motion Sense gestures, but again, the "resolution" of the sensor limits what you can do. Holding a hand up can play or pause media on the display, and waving will snooze an alarm. I like this gesture, but it's maybe a bit too easy. Just fling an arm up, and your alarm stops ringing. I have been snoozing more as a result.

Sure, if you want a new smart display. At $99, the 2021 Nest Hub has a much lower MSRP than the old version, but that device hasn't sold for full price in ages. In reality, the new Hub might be a little more expensive at launch, but I'm sure it will come down eventually. A hundred bucks isn't bad for what you get, in any case. The software is smoother than before, you still get the excellent display tech, and there's that maybe-too-easy snooze gesture. I like it even though it's dangerous.

The 2nd-gen Nest Hub succeeds at being a better Google smart display, but its value as a sleep tracker is questionable. I like that I don't need to remember to charge and put on a wearable before going to bed, but the insights I've gotten from Sleep Sensing haven't been compelling enough to get me to spend money. Maybe this feature will evolve over 2021, but I'm not sure it will ever be useful for me as a person with dogs who like sleeping on soft things. Sleep Sensing as a built-in feature of a $100 smart home gadget? Sure. Sleep Sensing as a paid add-on for that $100 gadget? I'm not convinced. 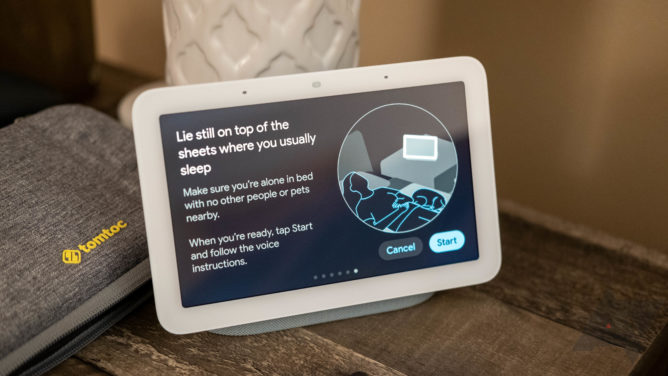 I'm going to continue testing Sleep Sensing and will update this review in the future with additional thoughts. For now, I don't think you should get the Hub specifically for sleep tracking until we know how Google intends to monetize it.

The OnePlus Nord SE isn’t happening after all