Google Maps is easily one of the company's most successful products. The era of using a paper guide or linear follow-them-or-get-lost MapQuest directions is long over. And though some competing services like Apple Maps might be prettier, Google Maps is king when it comes to functionality, tools, and services integrations. But the best-of-the-best is getting better this summer, and Google is rolling out a handful of new tools and tweaks, like indoor AR navigation, weather and air quality information, grocery pickup integration, and tweaks to reduce your dead-dinosaur-burning car's carbon footprint.

To start, Google Maps is bringing its AR-navigating Live View indoors, starting right now with "a number of malls" in Chicago, Long Island, LA, Newark, San Francisco, San Jose, and Seattle, plus airports, malls, and transit stations in Tokyo and Zurich in the coming months. Like Live View's outdoor counterpart, that means you'll be able to select a destination (like the airport gate in the GIF above) and get easy visual instructions you can follow courtesy of an AR-augmented view of the environment. 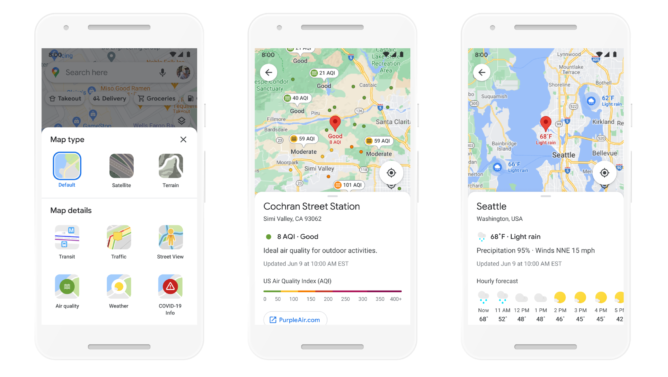 Google Maps is also picking up two new specialized layers that can help folks with allergies, or even just those hoping to dodge bad weather on a long drive. The air quality and weather layers are self-descriptive and show information for each as scraped from partner sites like The Weather Company and AirNow.gov in a visual overlay. That means you can see if a given route is the right one for a top-down convertible ride, or figure out if you should dodge the park on your way to work if the pollen is bad, or avoid a specific mountain road if the smoke is bad. The new layers will roll out on Android and iOS "in the coming months," with the weather layer available globally and air quality limited to Australia, India, and the US to start.

Over the last year, many of us started using things like curbside grocery pickup and grocery delivery services, and though it might be a bit late, Google Maps is also rolling out some new features for supported partner retailers like Albertsons and services like Instacart, with more planned later (though no timeline has been specified). You'll be able to see pickup and delivery windows, delivery providers for a given store, and information like fees and order minimums. The new information will appear in profiles in Search too. A new pilot program for Fred Meyer locations in Portland will also let Maps provide notifications for curbside pickup, and even notify the store when you will arrive, starting this summer.

Lastly, Google is rolling out a handful of interesting changes in a similar vein to the recent EV-oriented Google Maps tweaks. As before, the bulk of the come courtesy of AI-generated tweaks, but they'll help you make a dent in your carbon footprint without costing you any extra time.

Google is rolling out a new route-planning model later this year that considers details like road incline and traffic to better determine how efficient it is, rather than simply looking at time spent in transit. In cases where an eco-friendly route would match the fastest way, Google will push you to the latter, saving the world a bit of extra CO2 and saving you a few bucks potentially in rising fuel costs. If the eco-friendly route takes longer, Google will still present it as an option on the map with an easily spotted leaf icon so you can choose for yourself. There's even a new route-selecting interface rolling out "in the coming months" that will help you better select between modes of transit, helping remind you that there are ways to get around other than your car. Though Google's ML-based model will still push whichever mode you prefer, sometimes it's nice to remember you can walk or bike somewhere close.

Some countries have rolled out vehicle restrictions for some areas, declaring them low-emission zones where certain types of vehicles can't be used, and Google Maps will also pick up support for notifications regarding these zones in June.

As repeatedly noted, the timing for these different Google Maps features varies pretty wildly, but most of them should be available by summer, and that should come in handy once we're all vaccinated and furiously making up for the last lost year.

Amazon has a ton of memory cards on sale for up to 50% off, today only

How to enable photo timestamps on your OnePlus phone