Xiaomi's Mi Bands are known and loved for their incredible value, and today, the company is raising the bar yet again. It has just launched the Mi Smart Band 6 during its Mi 11 Ultra launch event, and it's quite the upgrade over its predecessor, sporting a 50% bigger display stretching across the whole front and SpO2 tracking. While the general appearance of the Mi Bands haven't changed for the last few generations, the Mi Smart Band 6's front looks considerably more modern and seamless thanks to the much bigger display. It's rounded at the top and bottom to fit right into the body, giving the band a much more elegant look. Despite the increase in screen size, Xiaomi still promises up to 14 days of usage at the same battery size, though it remains to be seen if it can uphold that claim.

The Mi Smart Band 6 has also gained a few more capabilities. It can track a total of 30 different activities compared to the eleven the Mi Band 5 can work with, and it ups the automatic tracking game: It can detect walking, treadmill, cycling, rowing, and elliptical without you having to manually start these activities on the band. The sixth-generation device even supports SpO2 tracking, a feature usually reserved for higher-end devices. It can track blood oxygen saturation both during training and during sleep. As usual, the band doesn't offer NFC or payments internationally, and it looks like there's no microphone at all this time around. In China, the regular version is ¥229 (~$35) while the NFC edition costs ¥279 (~$42) and sales start in April. In Europe, the standard version will start at €45.

Additionally, the event marks the introduction of the Mi Smart Projector 2 Pro, projecting a 60 to 120-inch screen with a Full HD resolution. It supports HDR10 and reaches a maximum of 1300 ANSI lumens of brightness, which Xiaomi says should be good enough for usage during the day. It offers Android TV and doubles as a smart IoT hub with Google Assistant on board. It starts at €999, though the price can vary by country. 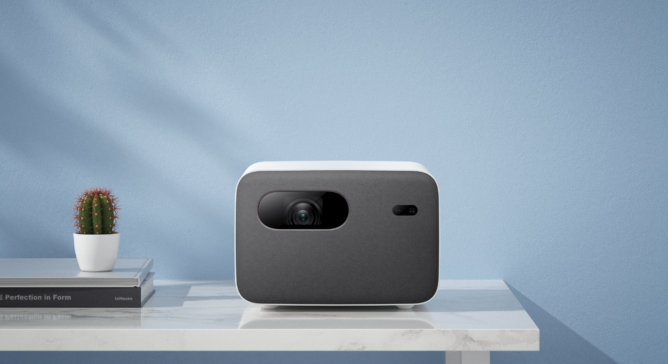