In December, Spotify garnered controversy after forcing some of its paying users to test a new version of its desktop and web apps. Not only had these users not signed up to become beta testers, but the interface itself was clunky and broken, with questionable changes made to search and artist pages. Spotify is making the update available to everyone beginning today, and for better or worse, most of the UI elements we saw last year seem to be here to stay.

Some of today's changes do bring real improvements to the app, especially when it comes to playlists. A search bar is embedded in every new playlist so that you can add songs and artists directly on the page itself. That's an excellent enhancement, though the standard "Recommended Tracks" menu replaces it once you move to a new page. Also, you can finally download specific tracks and albums from the app's desktop version for offline listening, rather than just playlists as previously offered. 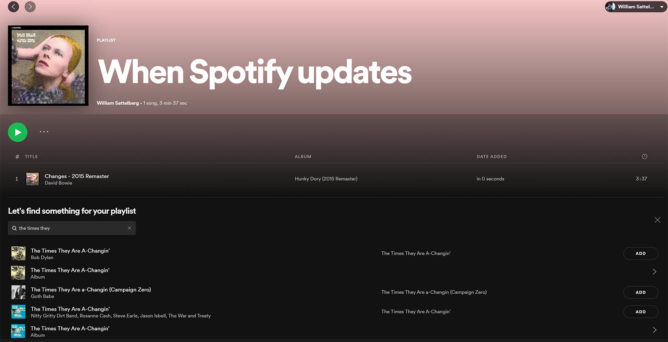 All that said, one of the more-complained-about issues users had with the beta version does look like it's sticking around: The search bar has been replaced with a new search tab found along the app's left side. Rather than being able to click on a search bar at the top of the display, you'll have to navigate away from your current page to search for new music or podcasts.

Another common criticism from the beta has also made it into the final release. Artist and track name columns have been combined, eliminating the "Artist" column from the app altogether. Although each track's spacing has been adjusted to make it easier to tell individual entries apart, the change has been made permanent. Speaking of which, sorting playlists by selecting columns like "Title" or "Date Added" seems to have been removed, at least on the updated web version.

Many of the changes to Spotify's desktop app in this new update feel designed to bring the experience in line with recent updates to the mobile app. Some users may appreciate being able to jump across devices without the interface changing, but the new look lacks some of the power features die-hard music fans want.

Spotify's new UI is available starting today, and it should make its way to all users globally over the coming weeks.

This Android phone is on its fifth year of OS updates