Hulu streams 4K content to Apple TV, Fire TV, and Chromecast Ultra owners, but it has never raised the resolution cap beyond 720p for most with Android TV. Some reports, however, indicate that things may be taking a step up for the forlorn platform.

Hulu's support pages don't exactly make it clear that most if not all Android TVs up to this point have only been able to stream its content at 720p. The only hint you get is with the mention of Live TV streams capped at 720p and 60fps.

2019 Nvidia Shield owners have taken to Reddit to talk about a change in the Hulu app's maximum supported resolution — found in the "App and Device Info" screen — from 720p to 1080p. 9to5Google followed up with some screenshot evidence that an Android TV device does support 1080p on Hulu. 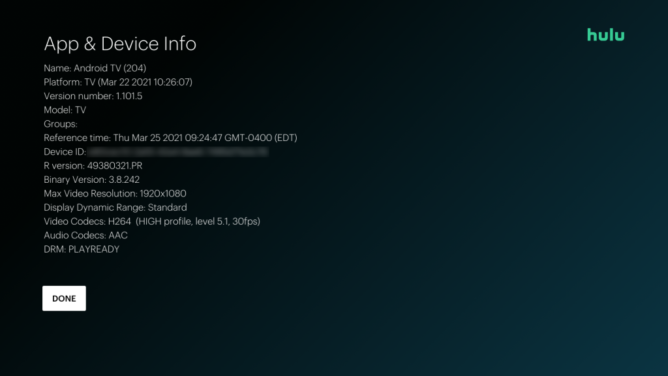 It appears that 2017 Shield owners have been left out of this upgrade.

As to how it might be rolling out, it's been speculated that a recent app update (potentially v.36F53FDVP3.8.242) paired with a server-side activation may be the trigger. You can check the Play Store to refresh your app or sideload it via APK Mirror.