OnePlus's newest pair of phones won't be available to the public until next Thursday, which gives the company plenty of time to squash some bugs in their software. Both the OnePlus 9 and 9 Pro are getting updates in advance of their official arrival in hopes of making each device a little more stable.

As you may expect from an update as early as this, some significant fixes are on the way from OnePlus. Bluetooth compatibility issues are resolved, the ultra-fast charging is now "stabilized," and problems with the notification bar appearing in the UI have been corrected. Some additional improvements to overall system stability are included, though the changelog keeps it pretty vague.

OnePlus is also working to enhance the camera software, a vital task considering how serious it's taking photo quality this time around. According to the patch notes, noise and white balance issues have been optimized, as have nighttime brightness and highlight control. Color performance in Pro mode has also been improved. 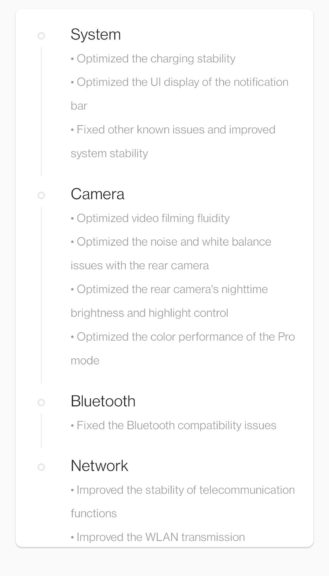 Being a pre-release update, you won't find patch notes on the OnePlus forum just yet. Check out the screenshot above for a complete list of changes.