Realme and Redmi phones have historically been pitted against each other, and for a good reason. They offer oodles of value for money with closely-matched specs, making it a tough decision for consumers. It doesn't take an expert to figure out that the newly-launched Realme 8 Pro, with its 108MP camera, is pitted against Redmi's recently-unveiled Note 10 Pro Max.

So, if you're looking to pick up either of the devices but aren't sure which one's better suited to you, read on for some help in making an informed decision.

Both phones have a large footprint, but that's probably where the similarities end. While the Note goes for a glass back (Gorilla Glass 5) and discreet, elegant colors, the 8 Pro uses a polycarbonate back with a conspicuous design. The plastic back doesn't necessarily reduce the appeal of the Realme phone, but the "DARE TO LEAP" branding is a bit too aggressive for my liking, and unlike the X7 Pro, all three color variants of the 8 Pro have this bold motto printed on them. 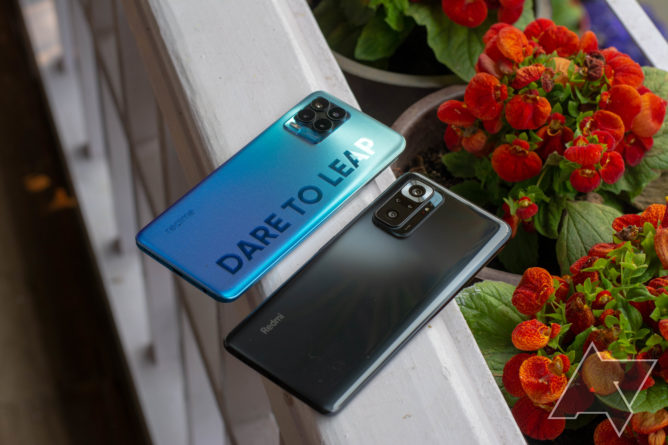 The Note 10 Pro Max offers a more tasteful design, in my opinion, with a trio of colors that caters to a wider audience range. Its IP54 certification that helps with splash protection also gives it the edge over its competitor.

OLED panels, but not the same 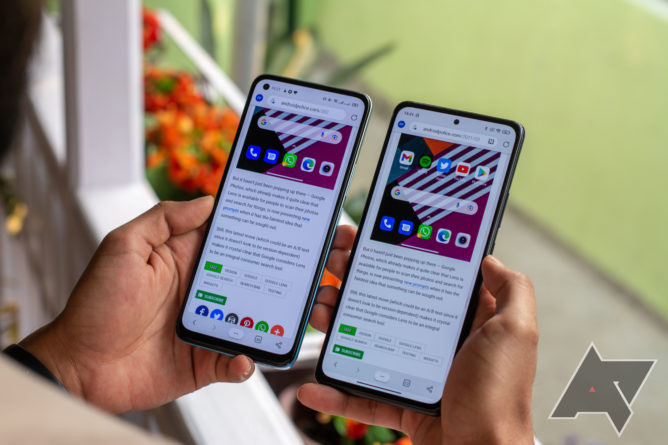 Both phones use Full HD+ OLED panels, but the Realme 8 Pro's doesn't boast a high refresh rate. The Note 10 Pro Max pushes ahead in this area with a 120Hz refresh rate that results in a smoother user experience. While it's not a sin to ship a 60Hz display, the Realme 8 Pro doesn't impress in other display aspects either — it lacks HDR10 support and has a noticeably thicker bottom bezel. This, and the fact that the Note 10 Pro Max has a pair of stereo speakers, means the Redmi phone is easily the better choice for media consumption.

The 8 Pro is powered by the same processor as its predecessor, the Snapdragon 720G, accompanied by up to 8GB of RAM and up to 128GB of expandable storage. It's capable enough and can handle games like Call of Duty at high graphics settings, plus it fares well in app-opening speeds and RAM management. However, at the time of writing, the UI suffers some major stutters that take away from the user experience.

Unfortunately, the Redmi Note 10 Pro Max that we recently reviewed — despite its newer Snapdragon 732G and up to 8GB of RAM and up to 128GB of expandable storage — suffers from similar stuttering issues. While the performance is very similar to that of the Realme 8 Pro, the 120Hz refresh rate surely makes the phone snappier to use. It does lag behind the 8 Pro in terms of memory management, though, struggling to keep even 3-4 apps open in the background.

It's also worth noting that the Redmi offers much better haptic feedback that blows the rattling motor on the Realme out of the water.

Battle of the 108MP cameras

The Realme 8 Pro and the Note 10 Pro Max share the same primary sensor: the 108MP Samsung ISOCELL HM2 — they both deliver good images, though the former showcases slightly better dynamic range. The Redmi amps up the saturation a bit too much for my liking, and it almost makes some elements (leaves in the sample below) look artificial. Both phones have 8MP ultrawide cameras, but the 8 Pro captures more details (notice the pink and purple flowers on the bottom left) — colors are a bit muted, though. While it's best not to expect good shots from these cameras in low-light scenarios, the 8 Pro has the benefit of a dedicated night mode that salvages details that the Note 10 Pro Max isn't able to. As for macro shots, the Note with its 5MP "telemacro" sensor definitely takes better images, and the sample below should shine a light on how bad the 2MP sensor on the 8 Pro is. In terms of video, both are quite similar in that the front camera can take up to [email protected] videos while the primary sensor at the back maxes out at [email protected] There's a dedicated stabilization mode on both phones that can help take steadier videos, albeit only for [email protected] captures. They both have unique features, too — the Note 10 Pro Max has the fun clone video feature, whereas the Realme 8 Pro can take starry night time-lapse videos.

If the macro sensor matters a lot to you, the Redmi Note 10 Pro Max should be the better camera phone for you. But the saturated colors and inferior ultrawide performance tilt the result in favor of the Realme 8 Pro, in my opinion.

Even though we're talking about budget phones here, it's good to know that no matter which one you choose, you'll be greeted with Android 11 out of the box. However, that's about the only thing they have in common. MIUI 12 steers a bit further away from stock Android and layers the interface with intuitive visuals and fluid animations. It also has an iOS-inspired control center that gives you quick access to smart home controls. You can check out some of the best MIUI 12 features here. 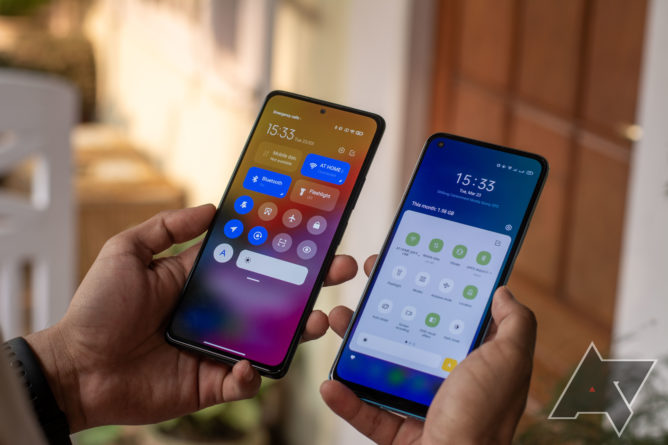 Realme UI 2.0 is much closer to stock Android. It's got a bevy of customization options, and you also get features like floating windows and an advanced dark mode that lets you choose between three different hues of black.

Both skins are feature-loaded but also come with system ads — you can choose to disable them, at least. Redmi and Realme don't guarantee a minimum number of software or security updates, but I'd bet on the former for longer support.

The Note 10 Pro Max has a bigger battery at 5,000mAh, while the 8 Pro has a 4,500mAh cell. Both phones should easily last a day, but you'll be able to get a bit more from the Redmi phone. It's good to know that they also support extreme power-saving modes that will make the most of the remaining juice if you're not close to a power source. 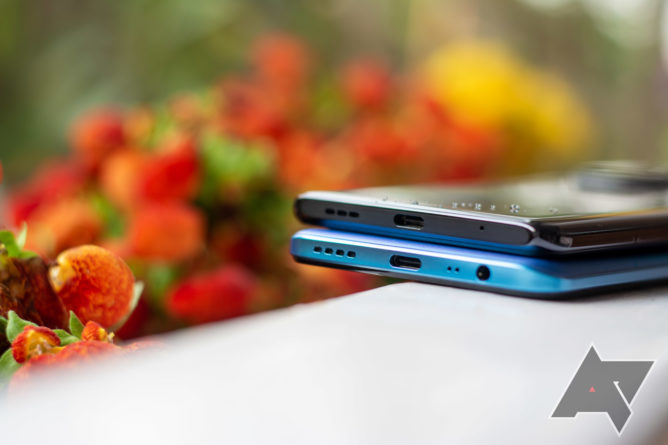 However, when it comes to charging, the Realme 8 Pro takes the lead with support for 50W SuperDart wired charging that only takes 50 minutes for a full charge. The Note 10 Pro Max only supports 33W charging, which means 0-100% in 1 hour and 30 minutes.

If I had to buy a phone today, I'd get the Redmi Note 10 Pro Max (or the Redmi Note 10 Pro) over the Realme 8 Pro. It has a more universally-appealing design, a better 120Hz display, a versatile camera setup, and a long-lasting battery. The Realme 8 Pro is not a bad phone, but it just doesn't offer as much value for money as its competitor. It's the divisive design and the lack of a high-refresh-rate display that really hurts its chances. 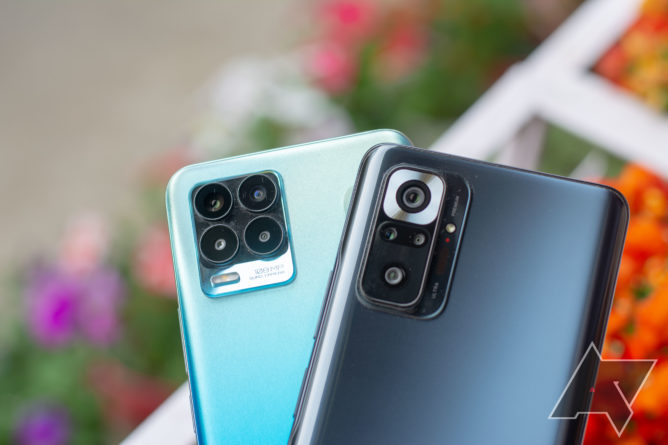 Having said this, both phones definitely need a bit more polish on the software front as stuttering performance is unacceptable on phones that cost this much. It's also worth noting that both devices lack support for 5G networks, though — given the state of 5G in India (non-existent at the time of writing) — this shouldn't be a deal-breaker for many prospective buyers. If you're in a region where 5G is a viable option, you may want to check out the Realme X7 5G instead or you could wait for the 5G version of the Realme 8 Pro that's "coming soon."