Above, you can watch the official trailer for Racing Master. While the majority is a cinematic, there appear to be a few quick glimpses of gameplay. More or less, the title looks a lot like Codemasters' GRID series, which makes sense since the game is utilizing the developer's proprietary EGO technology.

Details are still light, but we already know the game will offer multi-platform play, with Android and iOS versions already announced. Further platforms will be revealed at a later date. A regional open beta will start this month for those who live in the US and Canada, though the specific date is still unknown. The game will feature real-world tracks, races will take place in real-time, and there will be a multiplayer focus. There's no word yet how the game will be monetized, but since this is a NetEase title, it's probably a safe bet to expect a free-to-play release that will be stuffed with in-app purchases.

Racing Master isn't yet listed on the Play Store, though eager fans can pre-register on the official website.

GUANGZHOU, China, March 12th, 2021 – Dahua studios of global games developer and operator NetEase Games, in conjunction with Codemasters® - the award-winning British video game developer and publisher specialising in high-quality racing games including DIRT, GRID, and the BAFTA award-winning official F1® series today announce a new, cross-platform authentic racing game, Racing Master, will be available on both iOS and Android during its beta test. Racing Master will follow on other formats, with a Beta available in the US and Canada from March.

Racing Master is a real-time simulation racing game. Developed using the Unreal 4 engine and Codemasters’ proprietary EGO technology, players will experience intense, authentic racing with precision-engineered vehicles. Players have access to hundreds of hyper-realistic cars from brands including Ferrari, Lamborghini, Porsche, Koenigsegg, and Aston Martin. Race against other players in cities around the world to become a racing champion.

Steeped in automotive culture, Racing Master allows players to race, tune and build their ultimate car collection. Customise vehicles with real-world parts from leading manufacturers and set the handling from casual to simulation for maximum control. With both tilt and touch options, Racing Master is the definitive racing experience, fully optimized across every platform.

A new trailer for all potential racers can be viewed here: https://www.youtube.com/watch?v=7n4ISfLMi7Y

“I’ve always wanted to create a high-quality, realistic racing game.” Bo Zhang, the Producer of Racing Master at NetEase Games, commented, “I am beyond grateful and truly honored to have this opportunity to fulfil my aspiration. With Racing Master, we set out to provide a platform for players to spark their passion for racing and experience the thrill of realistic driving!” Ming Huang, the Supervisor of the game, added, “Partnering with Codemasters gives us the confidence, we need to achieve our goals and create a mobile racing game that can stand out amongst the rest.”

“As leaders in the racing category, we are excited to finally tell the world about Racing Master, the result of our strategic partnership with NetEase Games,” said Clive Moody, SVP Product Development at Codemasters. “NetEase Games shares the same passion and vision that’s needed to deliver a best-in-class racing experience. Taking the world’s most aspirational supercars, Racing Master is rooted in automotive culture and provides authentic wheel-to-wheel action for the mobile platform.”

Racing Master has been designed to be the perfect playground for all racing enthusiasts. The game boasts competitive real-time races against players from around the world, featuring real-world tracks across several race types in fully licensed cars. NetEase Games is delighted to invite racers to sign up for the game’s Beta to help further the game’s development and establish it as a leading mobile racing title.

More information about Racing Master can be found on the game’s official website and social media channels: YouTube, Facebook and Discord
###
ABOUT NETEASE GAMES
NetEase Games is the online games division of NetEase, Inc. (NASDAQ: NTES), developing and operating some of the most popular PC-client and mobile games in markets including China and Japan. As one of the world’s largest incubators of quality online game content, NetEase Games is dedicated to supporting the growth of innovative studios around the globe and growing an international presence along the way. To complement its self-developed games and world-class R&D capabilities, NetEase Games also partners with other industry leaders including Blizzard Entertainment, Mojang AB (a Microsoft subsidiary) and other global game developers to operate some of the most popular international online games in China. For more information, please visit neteasegames.com

ABOUT CODEMASTERS
Codemasters is an award-winning British video game developer and publisher with over 30 years of heritage. The company specialises in high-quality racing games including DiRT, GRID, Project CARS, and the BAFTA award-winning official F1® series of videogames.

Dahua Studios is a video game development studio of NetEase Games. With a focus on innovation and the spirit of craftsmanship, Dahua Studios collaborates with world-renowned game developers, such as CCP Games and SEGA, to present games of the highest quality. Dahua Studios has developed a series of widely-acclaimed games, including EVE Echoes, Super Mecha Champions, and the highly anticipated Total War Battles: WARHAMMER. 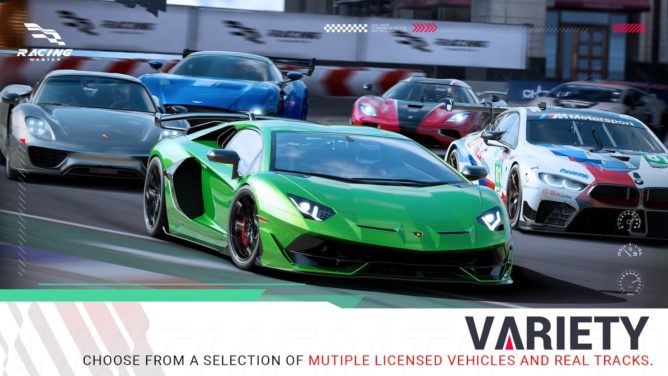 Codemasters and NetEase have finally provided an exact date for the first open beta for their upcoming mobile racer Racing Master. This open beta will start today at 07:30 pm (PDT), and access will end at 07:30 pm (PDT) on April 24, so this beta will last for a month for gamers in the US and Canada.

The following game modes are available in this test:
1. Track Trial: Drive your favorite car on different tracks.
2. Quick Race: No scores or ranks. Just enjoy the thrill of racing.
3. Qualifier: Compete and see who’s the better driver.
4. Casual Race: Only Solo Chase is available in this test.

The new Play Store listing offers a quick rundown of what players can expect from the open beta in the What's New section, and as you can see, more than a few racing modes will be on offer, including a casual solo mode for those that prefer to race alone. Like most beta tests, bugs and other issues may crop up, and so far, the number of supported devices appears to be limited.

As it stands, Racing Master is a beefy title, clocking in at a little over 4 GB, so you may want to preload the racer before the servers go live this evening. So if this sounds like something you'd like to do, you can install the title through the new Play Store listing linked below for your convenience.