The OnePlus 9 series is now official, comprised of the flagship OnePlus 9 Pro and the smaller OnePlus 9. They're OnePlus' first phones of 2021, sporting era-appropriate specs we're all already intimately familiar with — everything leakers didn't expose, OnePlus slowly, painfully, incontinently dribbled out itself in the weeks leading up to today's announcement. With pre-orders starting now, I guess we can go back over it all again, though.

The elephant in the room is the new logo festooned on the camera hump: OnePlus has partnered with Hasselblad for the pair of phone's new cameras — except the camera company didn't actually chip in with any hardware like lenses or sensor modifications. This is purely a software arrangement (for now). OnePlus claims it worked with three of the twelve Hasselblad ambassadors to tune performance to match their expectations of a "Hasselblad photo," and that ineffable quality includes an orange shutter button in the camera app. 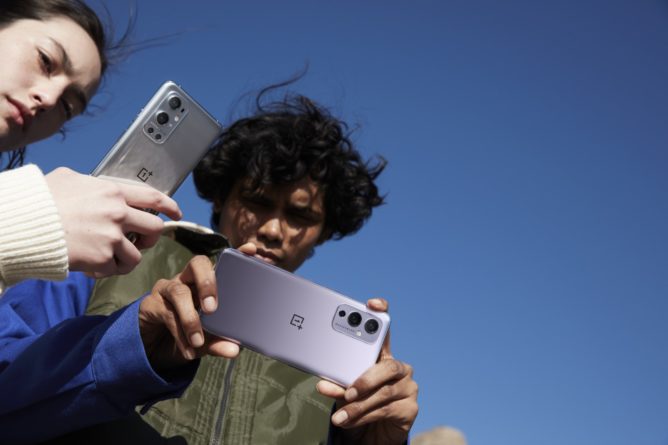 The bigger flagship-grade phone has the latest Sony IMX789, a positively huge sensor, plus the still eminently capable IMX766 for the wide-angle — that's usually the sort of sensor you see on the primary shooter. Rounding out the cameras are an unnamed 8MP telephoto and a 2MP Monochrome sensor, plus a 2MP front-facer. The primary and telephoto sensors benefit from OIS.

Outside camera upgrades, the other big feature to pay attention to with this new model is the upgraded wireless charging. This time, OnePlus was able to cram in 50W of power, which is kind of ridiculous. That's faster than phones from other US-available brands (including Samsung) charge with a wire. OnePlus tells us it tops up to full from dead in 50 minutes and from 0-70% in just 30 minutes. On top of that, the company's now old-hat Warp Charge 65 has picked up a "T" suffix, indicating reduced internal resistance and slightly faster wired charging. As with last year's 8 Pro and all of OnePlus' bigger flagship phones, this one sports a curved 1440p display with a built-in optical fingerprint sensor, but its overall footprint is slightly smaller than last year's positively monstrous model, and OnePlus does claim it's reduced the length of the curved area by 60%. The screen has been upgraded as well: It's still 120Hz, but this time around, it's LTPO, allowing for both power savings and an adaptive refresh rate that can scale all the way down to 1Hz. It also gets very bright, with a "peak" brightness of 1,300 nits (though how that's measured will probably vary from what you'll actually see in practical use).

Other specs round out our expectations for a 2021 flagship: Snapdragon 888, 8-12GB of RAM, 128-256GB of storage, an IP68 rating, 5G support (including mmWave), Android 11, etc., etc. If you were hoping the price would stay flat from last year, though, you're out of luck. OnePlus has crept up into spitting distance of that thousand-dollar barrier, with this latest model starting at $969 ($100 more for 12/256GB). Colors and finishes range from a glossy Morning Mist, a matte frosted Forest Green, and a sandstone-textured Stellar Black.

The OnePlus 9 is the smaller, slightly cut-down model. OnePlus even swapped up the materials: This has a fiberglass-reinforced plastic frame, not metal. (Sort of the inverse of the Galaxy S21's plastic back and metal frame?)

This model's camera is closer to last year's OnePlus 8 Pro, with the same IMX689 sensor behind the primary, though the wide-angle is the same as the 9 Pro. Unlike the 9 Pro, though, none of the sensors in the OnePlus 9 have OIS, we're told, and there's no dedicated telephoto camera, either. (Having reviewed the 9 Pro, I can say: You aren't missing much there.) Again, OnePlus blesses us with a dedicated monochrome sensor at a retina-searing 2MP. Again, the base 9 doesn't get the super-fast wireless charging that the 9 Pro enjoys, though it still can top up at 15W with your basic Qi standard. It still has the same 65W fast charging spec the OnePlus 9 Pro and last year's 8T enjoy while wired, though which is still faster than any other wired charging spec in a North American phone. It also has a super-smooth 120Hz display, though at a slightly lower 1080p resolution, and it hits a slightly dimmer 1,100 nit peak brightness. The unlocked version won't be IP rated, either, though we're told the version sold by T-Mobile will be.

Other specs match its bigger brother: Snapdragon 888, 8-12GB of RAM, 128-256GB of storage, and an optical fingerprint sensor. It supports 5G, but not the mmWave of its bigger brother (or the S21, which it competes with). Pricing starts at $729 for the base model, and $100 more for the upgraded RAM/storage.

They're both running Android 11. As usual, OnePlus tells us they're guaranteeing two major Android updates and three years of patches for both the OnePlus 9 and OnePlus 9 Pro. While that was good back in 2018, it isn't anymore.

Both phones in the OnePlus 9 series will see general retail availability on April 2nd. Though we were originally told that pre-orders open this Friday on March 26th, OnePlus was apparently full of it. Surprise, they're open today, with orders shipping Friday. However, the base model either isn't available for pre-order, or won't be available in the US, so you better want the expensive one.

The phones will be sold at T-Mobile, Amazon, Best Buy, B&H Photo, and OnePlus' own storefront.

Embargo materials were wrong! Thanks, OnePlus. Pre-orders are open now.

Here's how to fix those mysterious Android WebView crashes