OnePlus is all set to unveil the OnePlus 9 series next week, but that's not the only thing we're going to be seeing at the event. The company will also debut its first smartwatch, and now we've already got our first look at it.

YouTuber Unbox Therapy took to Twitter to reveal the OnePlus Watch in what seems to be a metallic black color. If you're drawing parallels to the Samsung Galaxy Watch Active2, know that you're not alone — the round dial, the two buttons on the side, and the shiny metallic-finish case almost seem borrowed. The image also shows a textured black band with a pin-and-tuck closure. 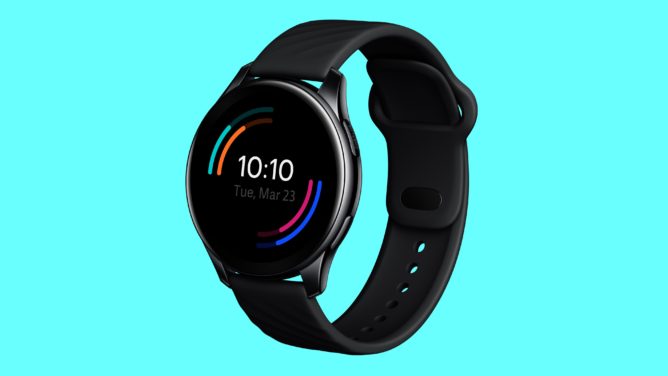 The leak isn't accompanied by additional information, but we already know a fair bit about the watch. OnePlus's CEO has indirectly confirmed that it won't run Google's Wear OS and instead will be based on an RTOS (Real-time operating system). Probably because it's skipping out on Wear OS, it will apparently provide up to a week's worth of operation on a 20-minute charge.

On the health and wellness front, the IP68-rated watch will support automatic workout detection, sleep tracking, and heart rate & blood-oxygen monitoring. OnePlus also boasts of "seamless connectivity" with its other devices — it'll be able to act as a remote control for OnePlus TVs.

There is no indication of the pricing, but OnePlus says it plans to offer a "best-in-class experience at an affordable price point." Since the launch isn't far away, it won't be long before we know if that statement holds water.

On the following Monday, the day before the scheduled release, OnePlus posted the video below to its YouTube account. It's an animated sequence of wooden hands finishing the metallic body of the watch. What significance the dummy imagery has for the watch (if any at all) isn't clear.

A more substantive look comes from prolific leak poster Ishan Agarwal, who dropped what looks like official renders of the OnePlus Watch in black and silver. He says that the device will start at €150 in Europe. The resemblance to Samsung's round watch designs are undeniable, but not unwelcome.

OnePlus Watch will start at around €150 for the European/EU Market.

Do NOT Convert to your own currencies and assume the price! It will be different. #OnePlus9Series #OnePlusWatch pic.twitter.com/j8e1Hi9rno

The OnePlus event announcing the new 9 and 9 Pro, along with the OnePlus Watch, is scheduled for tomorrow at 10 AM US Eastern time.

This story has been updated with a new promotional animation from OnePlus, and a new look at the leaked watch from Ishan Agarwal.