A few weeks ago I bought a used Kia Soul. (Please, no comments from the peanut gallery.) I'm pretty pleased with it overall, and my dog Marty freakin' loves having the spacious back all to himself. But it's a 2013 model, made in that awkward period when pretty much all cars had Bluetooth, but they sucked at it. The Soul's built-in Bluetooth stereo can't play, pause, or change tracks on my phone, which is a bummer.

There are a few ways to fix this. I could replace the stereo with a fancy Android Auto head unit… but if I was the kind of guy who would drop $500 into his car on a whim, I wouldn't be driving a used Soul. There's an AUX input on the dash and I could just directly connect it, but the Pixel 5's lack of a headphone jack complicates this, and my whole goal is not to need to touch a screen to control my music.

I searched for a cheap solution for my cheap car. And I found it on Amazon: a little Bluetooth-to-AUX adapter for $20. It's tiny, it can be powered by the USB port in my car (which is so old that it's labelled "iPod"), and it comes with a little hockey puck of physical control buttons. 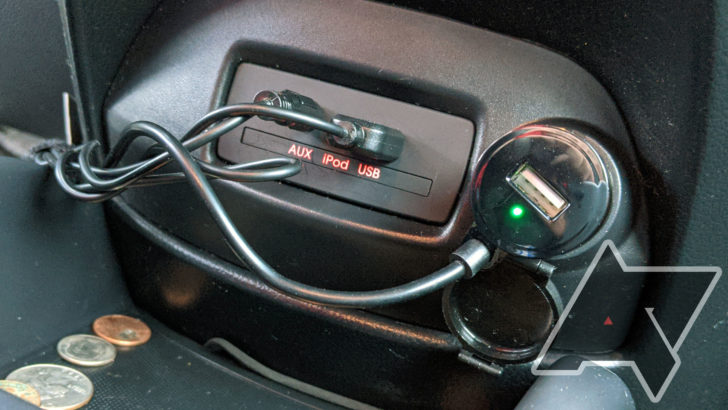 Left to right: the AUX cable coming from the SoundBot, the USB cable for power, and the separate adapter for my phone charger.

I've tried similar things a few times before in older cars, and haven't been impressed: the cheap ones tend to have connection issues, or a weird audio delay, or have issues reconnecting. Likewise, FM adapters always left a lot to be desired in terms of usability and sound quality. Not so with the SoundBot SB360. It works basically exactly how it's supposed to, with almost no delay and an immediate connection to my phone when I crank the engine.

The package came with a stick-on plate for the dashboard. I tried it out, but didn't keep it: it connects to the puck magnetically, but is loose enough to let it rotate, which lets the identical play, previous, and next buttons shift position. The magnetic holster came off after a few hours, too. I just stuck the puck to the dash with a bit of double-sided Gorilla tape and called it done. 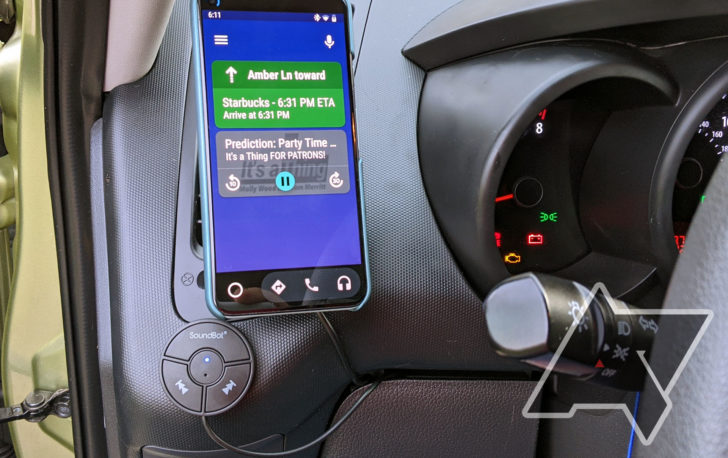 Having physical music controls in easy reach feels much safer than having to look at the screen to tap it.

Having two cables (USB power and AUX audio) going beneath my dash isn't exactly elegant, especially since I already have a phone charger in the DC power port. But with a little advanced cable management (read: shoving all those cables into the panel gaps in the steering wheel column), they don't get in my way. The only real downside is that the call controls on my steering wheel don't work, but I answer the phone in my car so infrequently versus playing music or podcasts that I much prefer this option.

I realize that this gadget is only relevant for a fairly narrow range of vehicles—new enough to have AUX input, but old enough to not have Bluetooth (or to have it poorly implemented, like mine). And it's a long way from a full wireless car interior, as seen on the latest models. But with my magnetic, wireless-charging phone mount, I can now just drop my phone in place and go. My phone auto-connects to the SB360 adapter and launches Android Auto, I can navigate via "hey Google" command, and I can adjust the music with physical buttons without taking my eyes off the road. I'd call that twenty bucks well spent.

17 new (and 1 WTF) Android games from the last week: The best, worst, and everything in between ...