If you were having difficulty sending a message on Whatsapp or Facebook Messenger earlier today, or if you ran into problems signing into Instagram, you weren't alone: All three Facebook services suffered a widespread outage, with tens of thousands of reports across seemingly all markets. Other services like Oculus may also have been affected. However, things seem to be normalizing now as of around 2:30PM ET.

Reports of severity for the outage varied slightly. Some of us here at Android Police were able to connect to Facebook Messenger, and it may have been among the first services to come back online. The appearance of error messages between apps also varied. On Instagram, the outage manifested as a "5xx Server Error," while WhatsApp simply showed the clock icon next to messages that weren't being delivered.

Above: Error messages in Instagram (left) and the clock indicator for messages that aren't being delivered in WhatsApp (right). Below: Facebook Messenger's error.

Facebook Messenger's symptoms varied a little more. Some customers saw the "Waiting For Network" error, as shown just above, but messages themselves may have gone through, though that wasn't true for everyone.

Are all of Facebooks servers down, I heared WhatsApp isn't working either pic.twitter.com/3WNFUk0SeE

Facebook's Oculus VR may also have been affected by the outage, according to reports at venues such as Twitter, though Downdetector did not corroborate that. (Downdetector, in isolation, isn't always a reliable source for outage reports, as customer claims often bleed over into other services erroneously, and it has a history of pulling false positives from social media.) 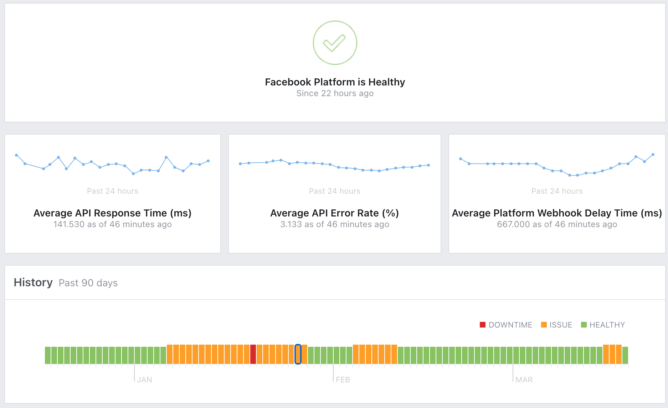 Facebook's developer status dashboard made no note of the outage.

Facebook's platform status dashboard did not make a note of the outage either while it was happening or later when services began to come back online.

Reports of issues began around 1:10 PM ET and came from all markets across North and South America, the Middle East, Europe, and Asia. Problems did not appear to be regional. However, starting at around 2 PM ET, the service outages began to resolve for customers, and by 2:30 PM things were mostly back online.

We have reached out to Facebook for more information regarding the three service outages, and were provided with the following statement from a spokesperson:

Earlier today, a technical issue caused people to have trouble accessing some Facebook services. We resolved this issue for everyone, and we apologize for any inconvenience.

Last month WhatsApp renewed its efforts to retain customers in the midst of its unpopular privacy policy changes, rolling out a "simplified" explanation for those adjustments, though that hasn't stopped customers from switching en masse to competing services like Signal and Telegram — the former even suffered its own outage due to a surge in demand.

The last time we're aware of when all three of these Facebook services suffered a big simultaneous outage was back in 2019, though Facebook itself was affected then. At that time, the issue was attributed to a "server configuration change." The company did not claim complete resolution to that outage for over 24 hours.

Facebooks' affected services appear to be coming back up, and reader reports indicate that Instagram, WhatsApp, and Facebook Messenger are all coming back online.

A statement from a Facebook spokesperson was also later provided.