The camera app on Chrome OS has remained largely unchanged since Google first brought Chromebooks to the market in 2011. Although handy in a pinch, its stagnant development is obvious by the lack of useful features. It received video recording only three years ago and recently got a native QR code scanner. While it has improved over the years, its implementation feels too basic to be especially practical. That may soon change, as Google is working to deliver advanced controls to the camera app on Chrome OS.

Robby Payne from ChromeUnboxed recently unearthed "Expert Mode" on the Chromium Gerrit. It looks to add deeper manual control and other quality-of-life improvements. While there isn't a Chrome flag yet, we activated it in the latest Canary channel—with some effort. Once enabled, a metadata overlay and a new Expert Mode menu will show up in the Chrome OS camera app. Here's an in-depth look at the photography improvements coming to Chromebooks soon.

Several web cameras are capable of pan, tilt, and zoom (PTZ)—useful for video meetings and room scans. Google brought native support for PTZ to Chrome 87 so the camera can point at participants in a call. While a lot less practical outside of a conference call, PTZ could offer creativity options in the camera app. 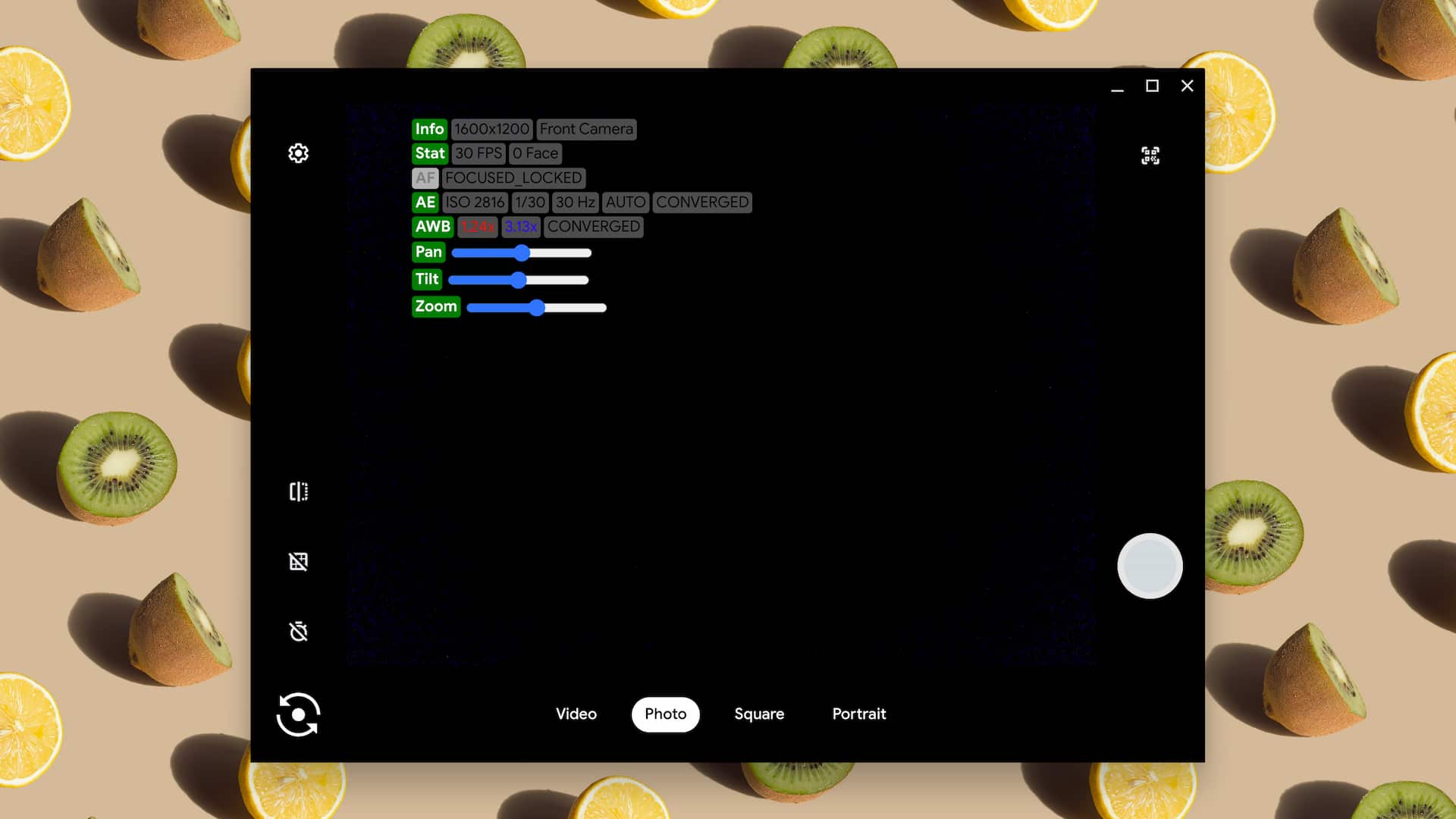 Keep in mind: a Chromebook's internal camera can't use PTZ because of space limitations. Toggling the "show pan, tilt, zoom" checkbox on my Pixel Slate has no effect, but we can expose its UI with some tinkering. Inside one of the Javascript files in the camera app's code are a few lines to hide PTZ with unsupported hardware. We can write a few lines of CSS code to revert it, which will show three sliders to control your camera's movements.

Face detection is a key element in digital photography that helps keep people in focus. With Expert Mode, the Chrome OS camera detects and counts the number of faces shown in its viewfinder.

My Chromebook recognizes the Unsplash portrait and my face in a near-instant. Using its camera, the app locks an orange auto-focus square onto us while adding "2 Faces" in the Stat area. As it is, the app only counts faces in the viewfinder, but it may help the camera adjust its focus. Ideally, it could also open the door to a slew of wacky face filters in the app.

It's no secret that recording videos takes a painful amount of space in your device's storage. To help reduce video size, Google is testing h.264 video profiles and bitrate options in the camera app. You can't adjust the encoding level on limited hardware, though. 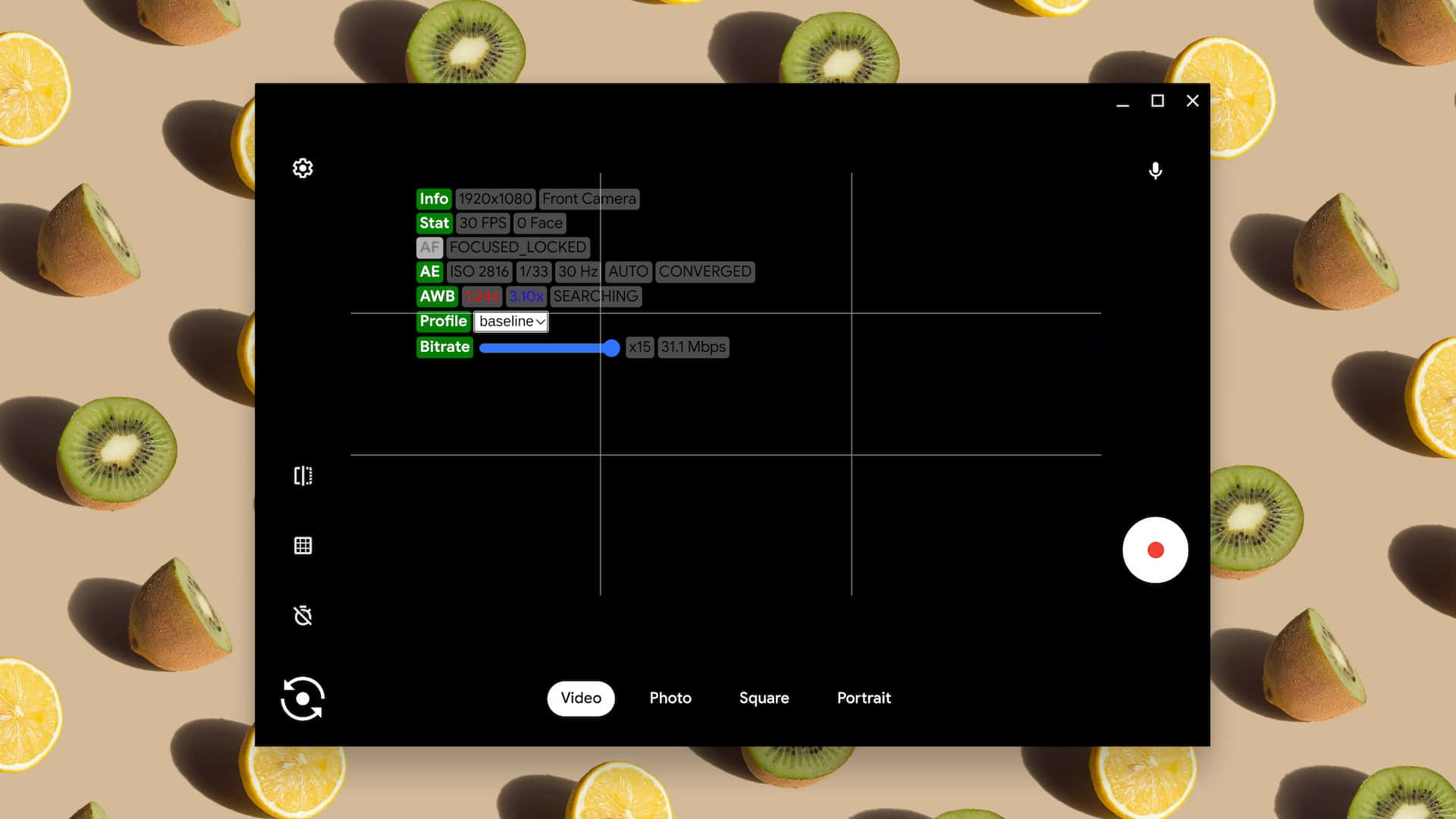 You have three h.264 video profiles to choose from in the metadata preview: baseline, main, and high. Videos encoded with Baseline use a low compression ratio and are playable on weak hardware and phones. Main is the superset of baseline, offering better frame prediction algorithms and compression. High offers the most video compression at the cost of lower device compatibility. You can also adjust the video's bitrate to reduce file size, but it'll lower the video quality.

Expert Mode may not be the most ground-breaking feature but could add some notable improvements for those who like to play around in the camera app. It still has some way to go, but it shows Google is finally working to build out more functionality in the camera app. We'll keep an eye out for changes in its development and will update you when we hear more.