Rumors of a follow-up of the 2018 surprise budget hit Pocophone F1 have been circulating for a while and it was even teased multiple times. After Poco recently posted a teaser on Twitter with some hidden hints inside, renders of the upcoming Poco X3 Pro have now been leaked.

While Poco has released a few phones since the F1, including the F2 Pro, all of them are basically just rebranded Xiaomi phones that were already on the market in some form, and none of them offered the same magical value as the original phone. 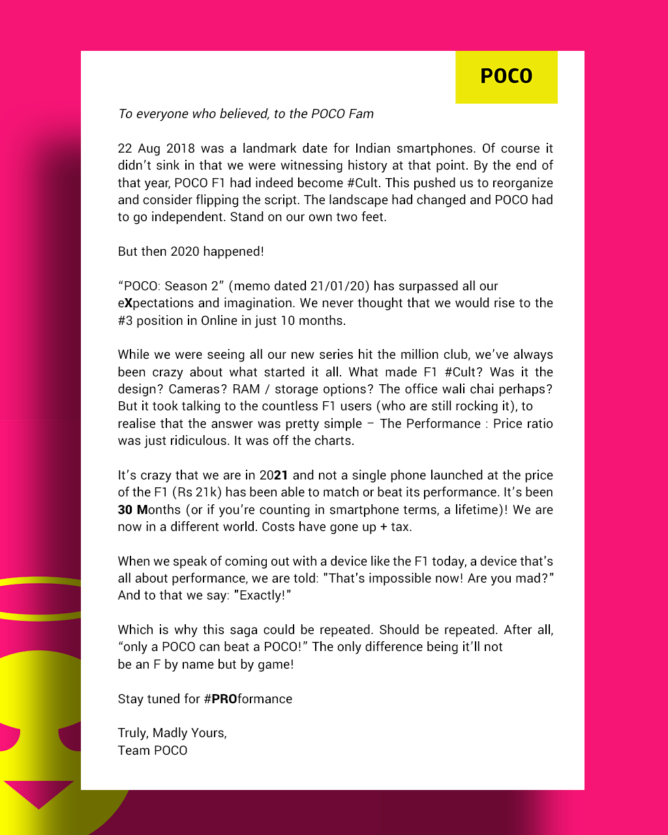 In the above teaser, the company talks about how it shook up the budget market with a respectable performance-to-price ratio, and how 30 months later no competitor launched a comparable phone at the price. Poco wants to repeat this saga and finishes the letter to its fans by saying, "The only difference being it'll not be an F by name but by game!" That suggested that the phone will be available at the same price as the F1, but without an F in its name — possibly due to the existence of the F2 Pro, based on the Redmi K30 Pro.

We've now seen renders of what looks certain to be called the Poco X3 Pro, courtesy of serial leaker Ishan Agarwal on Twitter.

Far from being the brand-new phone we might have hoped for, it would appear to be a slightly tweaked version of the X3 NFC from last year. The rear design is practically identical, with the same number of cameras, and the punch-hole front camera cutout returns on the front. With any luck, there will be some more interesting changes under the hood. According to Agarwal, the color options will be called Phantom Black (where have we heard that before?), Metal Bronze, and Frost Blue.

We'll likely find out more at the end of this month — the launch is rumored to be happening on March 30 — so stay tuned.