Apart from launching a new family website on families.google today, Google has also formally announced some improvements to its parental controls tool Family Link. While it still isn't as balanced, fair, and powerful as we would like it to be, the new features bring quality of life improvements for parents.

As we previously covered, you can now approve apps as "always allowed," which lets kids use them even when their screen time is up. That might be handy for remote learning apps and the likes. However, the exemption doesn't apply to bedtime — once it's time to settle down for sleep, children won't be able to use these "always allowed" apps, either.

There are also revamped daily, weekly, and monthly graphs on kids' device usage stats in the Family Link app. The evaluation now visually distinguishes between always allowed apps and the rest, letting you gauge how the ratio stacks up more easily.

In the Family Link Android app, parents now also see a selection of teacher-recommended apps, comprised of "thousands of teacher-approved Google Play apps for kids under 13 in the U.S." And if your kid is the kind of person to forget to charge their phone, you can now monitor the battery level straight from the app, too.

Perhaps one of the more requested features is the option to manage parental controls right on a kid's phone. To do that, parents can now look for the parental controls section in the system settings, where they can set screen limits right from the supervised device (after verifying their identity, of course). 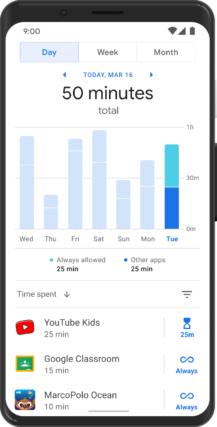 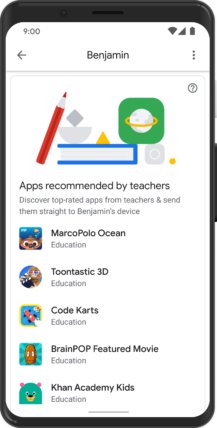 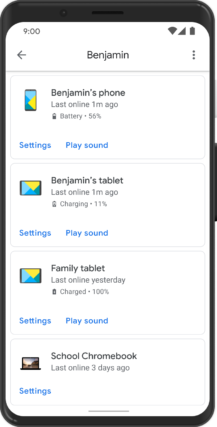 Google has been adding a constant stream of new features to Family Link over the last year, and given that it just launched its Families website, it sure looks like the company is committed to improving the tool. But it's still missing some obvious options like time limits for app groups, individual settings for single devices, and exempt options for bedtime.

The changes should be rolling out via a server-side update and may have reached your phone already, but you can still check the Play Store for updates or get the latest APK over on APK Mirror.