If you like to play games but don't want to invest in a console, Google Stadia is worth considering. It's a subscription-based service that lets you stream games and works on virtually any device, including your phone, tablet, computer, and TV.

To play on the latter, it's recommended to use a Stadia controller in conjunction with a Chromecast. If you don't own these devices, Google offers a Premium Edition bundle, which includes both of them. It usually costs $100, but it's now down to just $60. 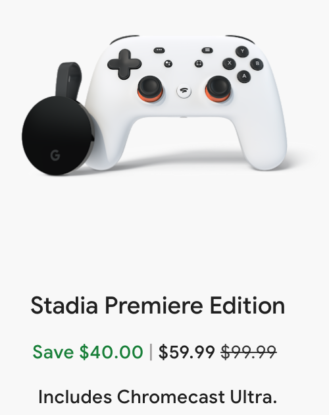 The Premiere edition includes a Stadia Controller and a Chromecast Ultra, letting you use both devices together to play games but also to cast content to your TV directly from your phone, tablet, or smart speaker.

This is a pretty good deal, as you basically get a free Stadia controller for the price of the Chromecast Ultra. However, keep in mind the latter has been discontinued and has now been replaced with a newer version with Google TV, which costs just $50, which is more interesting if you don't play games.