4K televisions are everywhere these days, and if you're aiming to get the best looking screen that's also super high-res, OLED is where it's at. An OLED TV offer improved viewing angles and unbeatable black levels over standard LCD sets thanks to its lack of backlight. Although OLED TVs are still priced higher than their standard counterparts, prices have continued to grow more affordable throughout the last year. Sony's 65-inch A8H is one of the best OLED televisions you can buy today, and it's finally broken under the $2,000 price point for the first time since Black Friday.

The A8H includes all the bells and whistles of any top-tier TV, including support for HDR and Dolby Vision, a 120Hz refresh rate for smooth gaming, and Android TV built-in. It has four HDMI ports, three USB ports, and is compatible with both Google Assistant and Amazon Alexa for voice control. 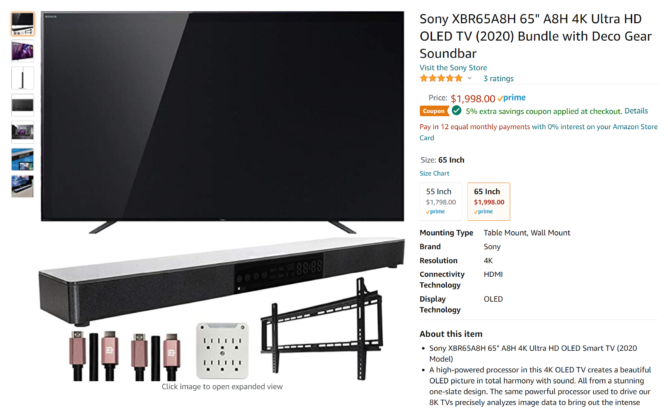 If you're willing to pick one up from Amazon, the company sweetens the deal with an included Deco Gear bundle: a 31" soundbar, a wall mount, some Velcro cable management, a surge protector, and two six-foot HDMI cables, all thrown in at no extra cost. Make sure to clip the coupon on Amazon before checkout to save an additional five percent as well.